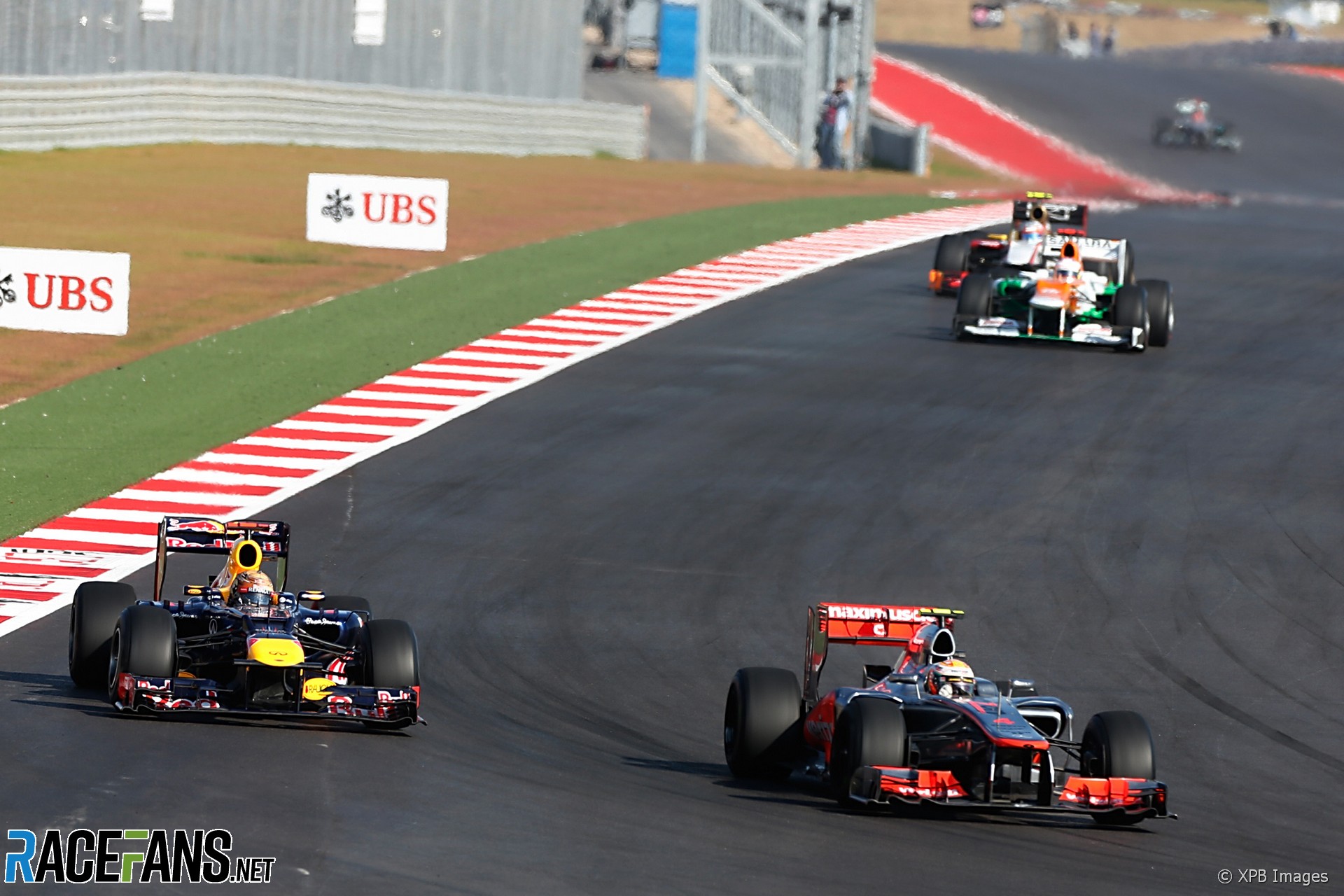 Lewis Hamilton won the United States Grand Prix for the second time in his career after passing Sebastian Vettel to take victory.

The driver who won the last United States Grand Prix in 2007 overtook both Red Bull drivers during the course of the race to repeat his victory.

Ferrari tactics pay off at start

Much discussion before the race concerned the tactics of Ferrari, who sacrificed Felipe Massa’s qualifying position of sixth to aid Alonso. By breaking the seal on his gearbox, which did not need changing, they automatically incurred a five-place penalty.

That dropped Massa to eleventh on the grid and moved Alonso up to seventh but, more significantly, switched him onto the cleaner side of the track.

When the race got started the worst predictions of how gripless the left-hand side of the track would be proved wide of the mark. But even so those in the even-numbered spots had a hard time accelerating away.

Second-placed Hamilton suffered from it, dropping behind Mark Webber. From fourth Kimi Raikkonen fell back into the pack while Alonso sprinted through to take his place from seventh.

But Alonso had to watch Hamilton pull away in the opening laps. The McLaren was soon replaced in his vision by the Red Bull of Webber. Hamilton got past on lap three initially but ran wide, then came back on the next lap to make the move stick.

The battle in the midfield was frantic on the slippery surface at the recently-completed Circuit of the Americas. Having qualified fifth, Schumacher reversed quickly out of the points, his situation not helped by his team being unable to accurately detect the temperature of his front tyres.

Nico Hulkenberg was first to pass the Mercedes, followed shortly by Romain Grosjean. The Lotus driver had strong pace and was soon on Hulkenberg’s tail, only to spin off at turn 19. His tyres now coated in dust, Grosjean lost more places when he returned to the track and eventually opted to make an early pit stop to make up places.

Schumacher’s descent continued as he was picked off by Raikkonen and Paul di Resta. Massa was next to pass him, followed by Jenson Button.

Button had slipped back further from his starting position of 12th and took several laps to come out on top of a spirited battle with Pastor Maldonado. He caught Schumacher on the run to turn one and dived to the inside as the Mercedes driver squeezed him hard.

Grosjean’s climb back through the field eventually prompted Force India to bring Hulkenberg in. He had already been passed by Raikkonen and his pit stop elevated Massa as well. At this point Alonso was losing time to his team mate and the Lotus, who were cutting up to a second per lap out of his advantage.

The situation turned to Alonso’s advantage when Webber’s car came to a stop on lap 17. It was the dreaded alternator once again – and that gave cause for concern for Vettel’s car as well.

That moved Alonso up to third but only briefly as he was soon into the pits. A slow right-rear tyre change put him at risk of falling behind Raikkonen, who continued to produce rapid times as Alonso struggled to get his tyres up to temperature after his stop.

But Lotus’s tyre change for Raikkonen wasn’t quick either, and he left the pits close behind Alonso. Ferrari took advantage of that, with a clean stop for Massa bringing him out in front of the Lotus.

This battle was now tangled up with otherdrivers who were yet to stop. Daniel Ricciardo passed Raikkonen and Massa, and then Raikkonen took the Ferrari as well. After Ricciardo pitted Massa closed on Raikkonen again and took fourth of the Lotus driver, who was not as quick in his second stint.

Button stayed out on his hard tyres until lap 36 before yielding third to Alonso. He recovered quickly after his pit stop, springing an opportunitistic move on Grosjean and then tackling Raikkonen for fifth on the outside of turn 12. But his hopes of going after the Ferraris were scuppered by a KERS problem.

At the front of the field there was only one car left for the other McLaren to pass. Hamilton closed on Vettel during the front stint and was poised to strike in the DRS zone, but dropped back as his tyres faded.

He came on strong again in the second stint but struggled to stay close enough to Vettel in the flowing turns three to ten to make a move stick.

That changed on lap 42 when Vettel caught the lapped HRT of Narain Karthikeyan. Hamilton came out of turn nine right on Vettel’s tail and the change of position in the DRS zone looked inevitable before they got there.

Vettel made him work for it, moving left then ducking right at the last minute, giving Hamilton little margin for error even with the championship on the line. A furious Vettel came on the radio to complain about Karthikeyan as Hamilton edged away.

By the chequered flag Alonso was 38 seconds behind the leading pair. The other Ferrari of Massa was well clear of Button, followed by the Lotuses and Hulkenberg.

The other Mercedes of Michael Schumacher slumped to 16th behind Kamui Kobayashi and Di Resta.

Having started behind the Marussias the Caterham drivers came home ahead, Vitaly Petrov followed by Heikki Kovalainen, with Timo Glock and Charles Pic behind them. The stewards investigated an incident between Kovalainen and Glock but ruled that neither driver had transgressed. Despite their trials in practice both HRT drivers finished in 21st and 22nd.

Drivers’ title goes down to the final round

Red Bull’s fears that Vettel’s alternator would also fail proved unfounded and nor did Hamilton suffer a repeat of his Abu Dhabi retirement. He delivered a victory for McLaren in his penultimate race for them which moves him back up to fourth in the championship.

Vettel was plainly disappointed at only adding three points to his lead over Alonso. “Good job boys. Great stop, great race. We did everything we could. The only mistake we made was not in our hands.” Told the team had won the constructors’ championship, Vettel added his congratulations and urged them to “be happy” despite an otherwise disappointing race.

But there remains one championship to be decided and that will come down to the final race. Vettel heads Alonso by 13 points heading into the final round and both of them believe they can win it.

143 comments on “Hamilton snatches victory from Vettel in the USA”