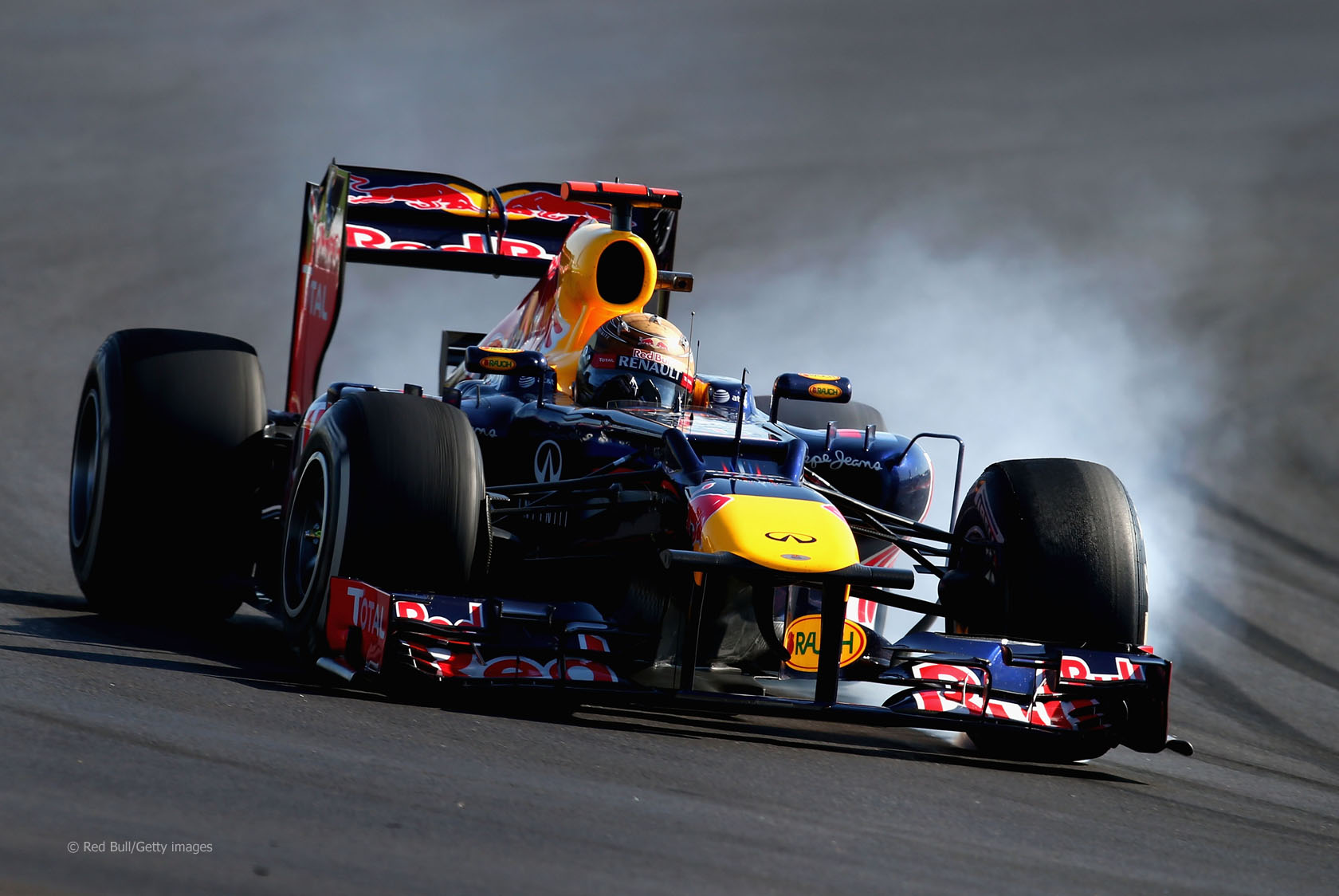 Lewis Hamilton put his McLaren alongside Vettel on the front row, while Alonso could only manage P9, which will become P8 after Romain Grosjean’s grid penalty for a gearbox change is applied.

Track temperature had doubled to 31C compared to the final practice session at the start of Q1. Abu Dhabi winner Kimi Raikkonen was the first big name to set a time, posting a 1’41.058, which was soon easily eclipsed by his team mate Romain Grosjean, who lowered the benchmark to a 1’39.078.

With the new track surface evolving rapidly, most teams chose to stay out on long runs to take advantage of the changing grip levels. Maldonado had another oversteer moment through Turn 19 on his way to comfortably getting through into the second session.

The concerns over the pace of the two HRTs to qualify within the 107% time were not realised, but Narain Karthikeyan suffered an apparent problem and stopped out on track. As the session neared conclusion, both Rosberg and Ricciardo traded laptimes to try and secure the crucial P17 slot, with the Toro Rosso driver ultimately missing out.

In a big result for the Marussia team, both Charles Pic and Timo Glock out-qualified their Caterham counterparts. It was Daniel Ricciardo joining the usual suspects eliminated from the first session this weekend. At the front, Sebastian Vettel was quickest with a 1’36.588, with Lewis Hamilton half a second behind.

The softer Medium compound was now a necessity for the remaining cars in the second session. Raikkonen again set the initial pace with a 1’37.457.

Fernando Alonso, already struggling for pace in comparison to the Red Bulls, appeared to be held up by the Mercedes of Michael Schumacher at apex of Turn 15 – gesiticulating to the German driver amidst the flash of the blue lights.

With just under five minutes to go, the McLaren of Jenson Button hit trouble. An apparent loss of power left Button coasting back to the pits and unable to improve his time, leaving him to tumble out of the top ten and, therefore, Q3.

Kimi Raikkonen just held off Bruno Senna to make it through in P10, while Paul di Resta will have been very disappointed with P13, with his team mate Nico Hulkenberg easily making it through into Q3. The Sauber team mates of Perez and Kobayashi and Mercedes’ Nico Rosberg will also be scratching their heads at their respective lack of pace, and will start from P15, P16, and P17 respectively.

The shootout for the inaugural pole position around the new Circuit of the Americas looked set to be a forgone conclusion before it began.

Mark Webber was the first man into the 1’36s before Lewis Hamilton easily beat the Australian with a 1’36.209. World championship leader and fastest man all weekend, Sebastian Vettel, posted a 1’35.877 to comfortably take provisional pole, while title rival Fernando Alonso struggled to keep within a second of the German’s time.

Vettel’s ultimate pace, resulting in a 1’35.657 – the fastest lap all weekend – proved enough to secure his sixth pole position of the season, but Lewis Hamilton pushed the Red Bull driver hard, missing out on pipping the German to pole by just one tenth.

Mark Webber will provisionally start third behind his team mate, but is currently under investigation for apparently missing a weight check. Grosjean’s P4 will become P9 after his penalty, promoting, Raikkonen, Schumacher, Massa, Hulkenberg and title contender Alonso. The extra grid slot could prove to be more of a curse than a blessing for the Ferrari, as it means the double world champion will begin the race on the dirty side of the grid.