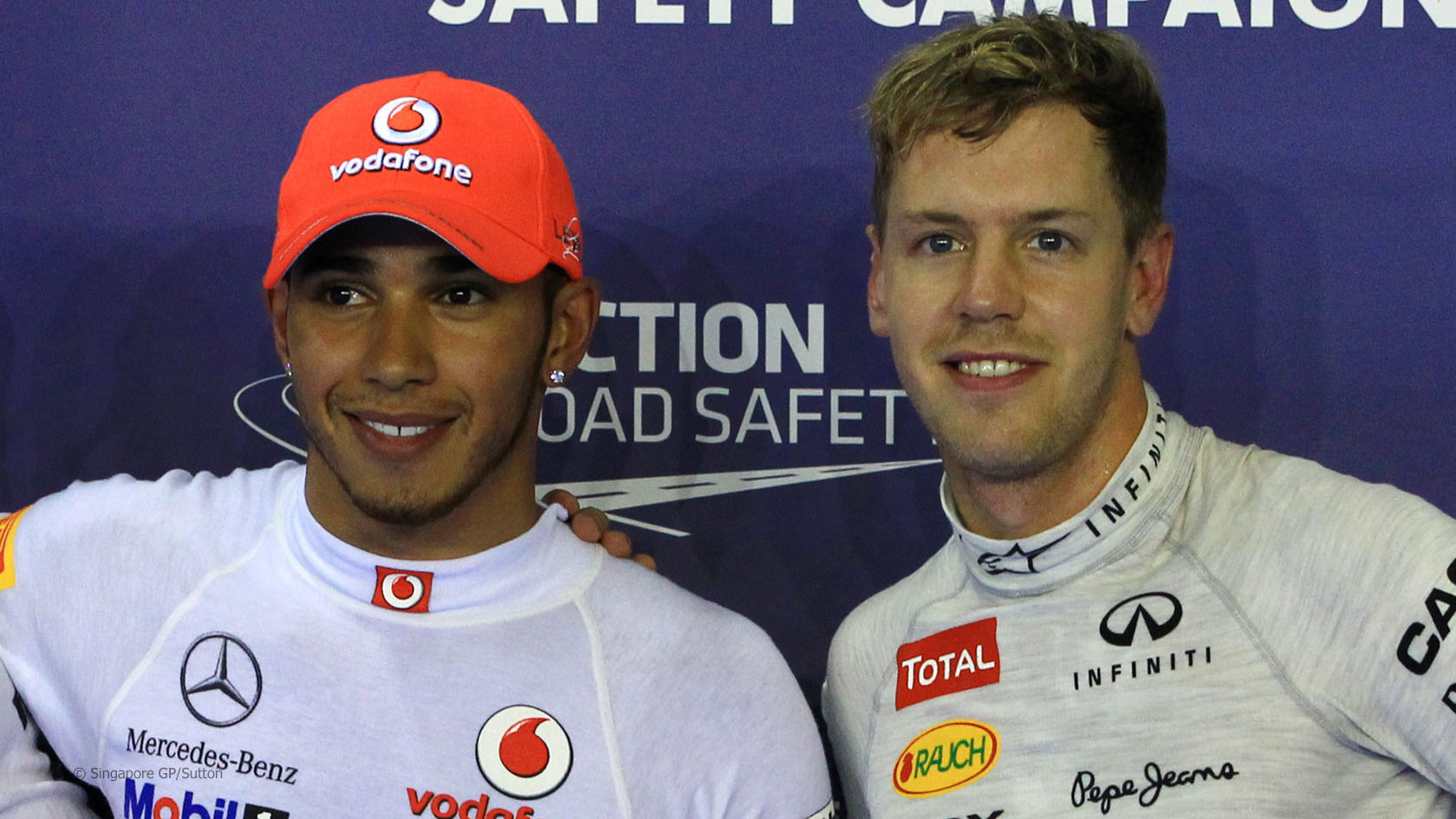 Sebastian Vettel and Lewis Hamilton staked their claim to be among F1’s greats at Singapore.

Vettel joined the top ten drivers who have won the most races and Hamilton added his name to the top ten pole-sitters.

In doing so they both equalled tallies set by three-times world champion Nelson Piquet.

Vettel scored his 23rd career victory and his second in Singapore. He is now among the top ten drivers to have won the most races in Formula One:

The day before Hamilton matched Piquet’s tally of 24 pole positions:

This was the fourth pole position in a row for McLaren. The last time they managed that was in 1999, when they had six poles in a row between the British and Italian Grands Prix.

Hamilton’s pole position time was almost two seconds slower than that recorded last year. The restrictions places on exhaust-blown diffusers over the winter probably explain much of the loss of performance. There were some minor changes to the track including revised kerbs and limited resurfacing.

Hamilton retired from the race meaning he now has four no-scores and three wins from the last eight races.

Nico Hulkenberg set the fastest lap for the first time in his career. He is the tenth different driver to do so this year.

The latter is particularly interesting because ten different drivers set fastest lap in a season which only had nine races. The inaccuracy of the timing system used at that year’s British Grand Prix meant seven drivers were credited with a fastest lap of one minute and 50 seconds.

As fastest lap was worth a point at the time the seven drivers – Juan Manuel Fangio, Stirling Moss, Jose Froilan Gonzalez, Mike Hawthorn, Jean Behra, Alberto Ascari and Onofre Marimon – were each awarded one-seventh of a point. Behra did not add to his tally during the rest of the season and ended the year with a total of 0.14 points.

No driver has managed to win two consecutive races in the 14 rounds so far this year. The last time an entire season was completed without a driver winning back-to-back races was the 1974 season, which had 15 Grands Prix:

Certain drivers seem to excel in Singapore. Fernando Alonso scored his fourth podium in five races here. The only time he has failed to finish in the top three here was last year, taking fourth place.

Paul di Resta may also be considered among the ranks of Singapore specialists. Last year he had the best result of his rookie season at the track, finishing sixth.

This year he improved on that with fourth – a new personal best – and also matched his best qualifying position with sixth place.

Timo Glock also shines at Singapore and he gave Marussia their best result to date with 12th place. This also improved on the best result scored by the team in its previous identity, Virgin. It moved them back in front of Caterham in the constructors’ championship.

In the 52 races since the ‘new teams’ arrived, 12th place is the best any of them have managed. Heikki Kovalainen finished 12th for Lotus (now Caterham) in the 2010 Japanese Grand Prix.

This race saw the 50th start for HRT. The team failed to qualify at Australia this year and last.

Michael Schumacher made his 300th start in an F1 race (in his 302nd appearance, see here). However while he won his 100th start (1997 Japanese Grand Prix) and 200th start (2004 European Grand Prix), this race ended with a crash which earned him a ten-place penalty for the next race.

The race was stopped after 59 of 61 laps under the two-hour time limit rule. The last race to be stopped short of full distance was the 2009 Malaysian Grand Prix, which was red-flagged and the result called based on 31 laps of a scheduled 56, due to heavy rain and poor visibility.

Spotted any other interesting stats and facts from the Singapore Grand Prix? Share them in the comments.