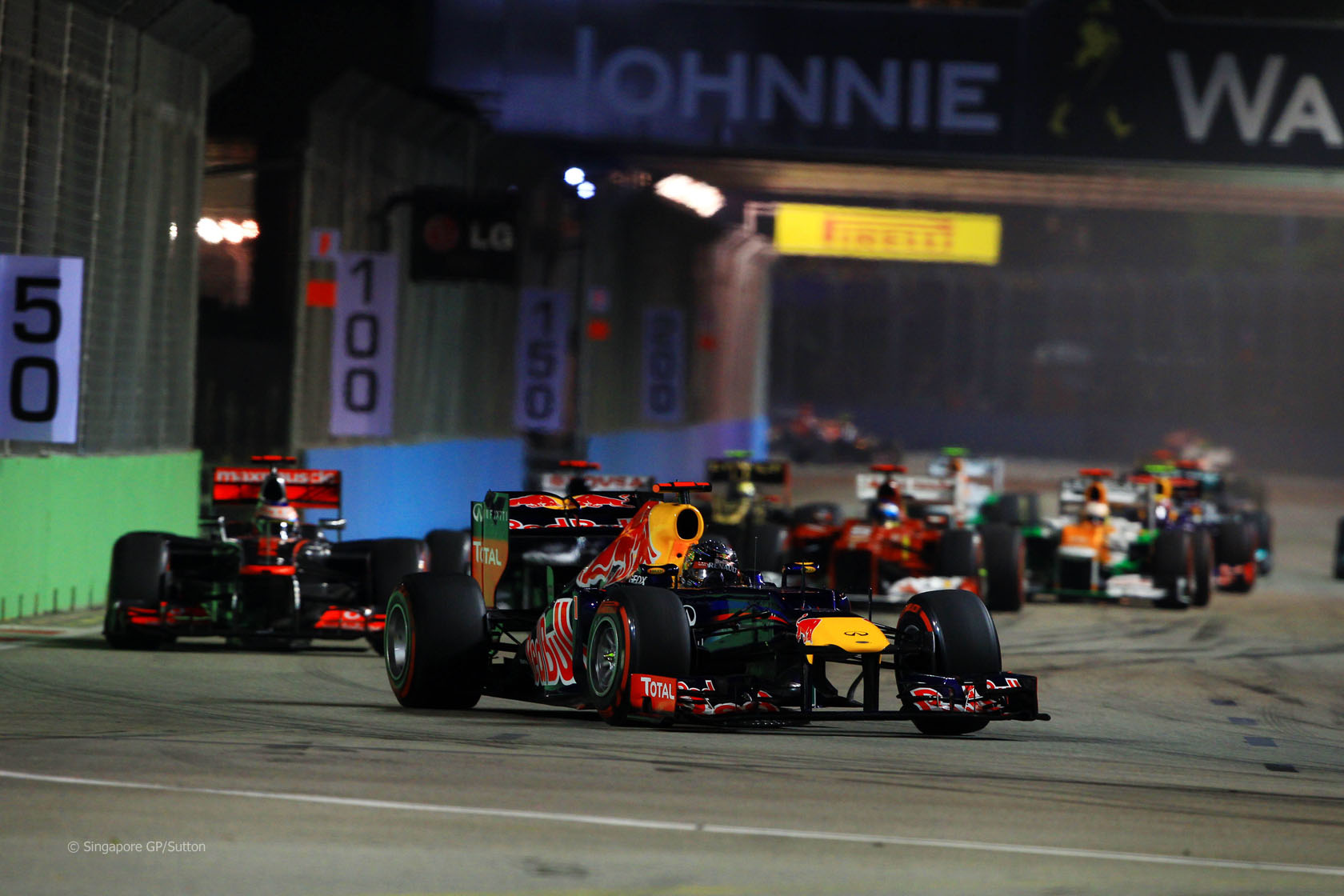 Which F1 driver had the best race weekend in Singapore?

Compare all the drivers’ performances below and vote for who you think was the best driver of the Singapore Grand Prix weekend.

Sebastian Vettel – Topped all three practice sessions but was mystified at his inability to turn a lap quick enough for pole position in Q3. From third on the grid he picked off Maldonado at the start and was perfectly placed to claim victory when Hamilton retired.

Mark Webber – Singapore seems not to be a favourite track of Webber’s. He qualified seventh and was using a three-stop strategy to try to gain ground when he was compromised by the appearance of the safety car. Spent the final laps trying pass Ricciardo without success. After the race he was penalised 20 seconds for putting all four wheels off the track while passing Kobayashi. Though he had clearly violated the rules, Webber was perhaps unfortunate as he had little time to decide whether to let Kobayashi re-pass him. Jenson Button – Lagged behind Hamilton in qualifying by a similar margin to that which separated the Red Bull drivers. Followed Vettel past Maldonado at the start and was able to run slightly longer in his first stint. This might have helped him later on had the safety car not appeared.

Lewis Hamilton – Snatched pole position off Vettel and maintained a lead of one to two seconds before a gearbox glitch put him out. The team first noticed a problem with the gearbox during the race and Hamilton reported difficulties shifting before it failed.

Fernando Alonso – Decided the high-downforce rear wing brought by the team was not an improvement and didn’t use it. He made an unusually poor start from fifth and was beaten to the first corner by Di Resta, but quickly re-passed the Force India. He seriously tested Maldonado’s defences but didn’t manage to find a way past the Williams. The demise of Maldonado and Hamilton’s retirement elevated him to third.

Felipe Massa – Never looked like making it into Q3 – he was over three-quarters of a second slower than his team mate. Picked up a puncture in the first corner melee when he was hit by Petrov, but the safety car brought him back into contention. Made an arms-and-elbows pass on Senna at turn 13 and complained he had been blocked but the stewards didn’t share his view. He later overtook Ricciardo and finished eighth.

Michael Schumacher – Fell behind Rosberg on the first lap, then ended his 300th start in a violent crash after the first safety car period, slamming into the back of Vergne at turn 14. He initially accounted for the crash saying: “I was braking but the deceleration was not as strong as it usually would be”. But the stewards noted he accepted responsibility and gave him a ten-place penalty for the next race.

Nico Rosberg – Like Schumacher he elected not to set a time in Q3 to save tyres. He incurred damage at the first corner which cost him some downforce. However he was able to pit for soft tyres during the first safety car period and run to the end for fifth place, his best result since Monaco.

Kimi Raikkonen – Lotus made extensive changes to their car on Friday night which improved its performance, but Raikkonen wasn’t able to get through to Q3. Spent much of the race stuck behind Schumacher until the Mercedes driver crashed out. Then Grosjean let him by into sixth, but he couldn’t progress further. “You cannot overtake,” he complained afterwards.

Romain Grosjean – Out-qualified Raikkonen after returning from his ban, but a scruffy Q3 lap left him eighth. He probably would have beaten his team mate had the team not ordered him to move aside: “It?óÔé¼Ôäós never easy as a driver to let someone past ?óÔé¼ÔÇ£ even if it is your team-mate,” he said, “but we need to be intelligent in these circumstances”. Paul di Resta – Force India showed good pace from early in the weekend and Di Resta capitalised, putting his car sixth on the grid. He may regret not being firmer with Alonso at the first corner given that he ultimately finished behind the Ferrari. Even so, fourth was a career-best result.

Nico Hulkenberg – Knew his car was good enough for Q3 but missed the cut. That doomed him to spending the first part of the race stuck behind Schumacher and Raikkonen. After they pitted he was able to run long on his soft tyres, but gambling on staying out when the safety car was first deployed ultimately compromised his race. Picked up a puncture while trying to pass Kobayashi and ended up 14th.

Kamui Kobayashi – Was eliminated in Q1 after struggling with his car, with similar problems to those he experienced in Hungary. Senna and Glock passed him at the start and it took Kobayashi until lap eight to get past the Marussia. A clash with a Force India ruined his race: “I couldn?óÔé¼Ôäót avoid touching Nico Hulkenberg,” he said. “There was no space to go. For me it was a race incident. Nico said sorry when we met after the race; apparently he had oversteer, I lost my front wing and had to pit.”

Sergio Perez – Said the team’s latest upgrade had failed to deliver the expected downforce gains. Having qualified 14th, he chose the usual Sauber gambit of starting on the harder tyres. But the safety car appearance neutered any advantage this offered – he finished 11th on the road and was promoted to the final point by Webber’s penalty.

Daniel Ricciardo – Ricciardo started on super-soft tyres and was able to make his second and final pit stop after the safety car appeared. He was eighth when the race resumed and although Massa passed him he had more success keeping Webber behind.

Jean-Eric Vergne – Still nursing a sore neck from his Monza acrobatics, the last thing Vergne needed was another crash. He was running tenth when Schumacher took him out, but the safety car had already scuppered his strategy anyway. Pastor Maldonado – Maldonado produced the surprise of qualifying, planting his Williams on the front row. He avoided causing the widely-predicted first corner apocalypse, though he did lose places to Vettel and Button. Withstood pressure from Alonso but hydraulic failure meant his redemptive performance ultimately ended in disappointment.

Bruno Senna – Hit the barriers a total of three times in practice and qualifying. But he was in with a chance of claiming a point when he suffered an alarming technical fault – his team told him to pull over and jump out of the car without touching the ground in case of a KERS problem. On top of that, his car broke down in the pre-race parade as well. A weekend to forget.

Heikki Kovalainen – Unusually he was out-qualified by Petrov. The team dropped the ball on strategy as well, not pitting him during the first safety car and then switching him to super-softs, which had to be changed again before the end of the race. Disastrously, that let rivals Marussia beat them to a precious 12th place finish.

Vitaly Petrov – Hit Massa at the first corner (“I?óÔé¼Ôäóve already apologised to him as we get on well”) and had to pit for a new front wing. The safety car offered him a chance to get back into the race but he was sent from his pit box with a loose wheel nut and had to be pushed back to his garage.

Pedro de la Rosa – Finished a lapped 17th: “The last five laps never seemed to end because I had no tyres left and I started to lose ground on Glock and Pic and Kobayashi, Kovalainen and Hulkenberg, who were flying, passed me like nothing.”

Narain Karthikeyan – Out-qualified de la Rosa for the second race in a row but had fallen behind his team mate when he hit the wall at turn 18: “I went on the dirty part of the track and the car didn?óÔé¼Ôäót turn which resulted in me going into the wall.” Timo Glock – Glock had a scare when he clouted the wall early on: “The rear tyre pressures came up a bit too much and I overshot the car in turn 19 and hit the wall. In the first moment I thought the race was over and I realised that the toe was really out; I had to change my driving style and, actually, changed everything that I could do to keep the car on track.” Glock pitted for soft tyres shortly before the first safety car period and stayed on them until the end – over half the race distance. Retirements ahead promoted him to 12th which elevates Marussia to tenth in the constructors’ championship.

Charles Pic – Pic was handed a 20-second race penalty and ordered to spend a day assisting an FIA road safety awareness campaign after failing to heed red flags during practice. In the race he did a long final stint on super-soft tyres and finished 16th.

Who was the best driver of the Singapore Grand Prix weekend?