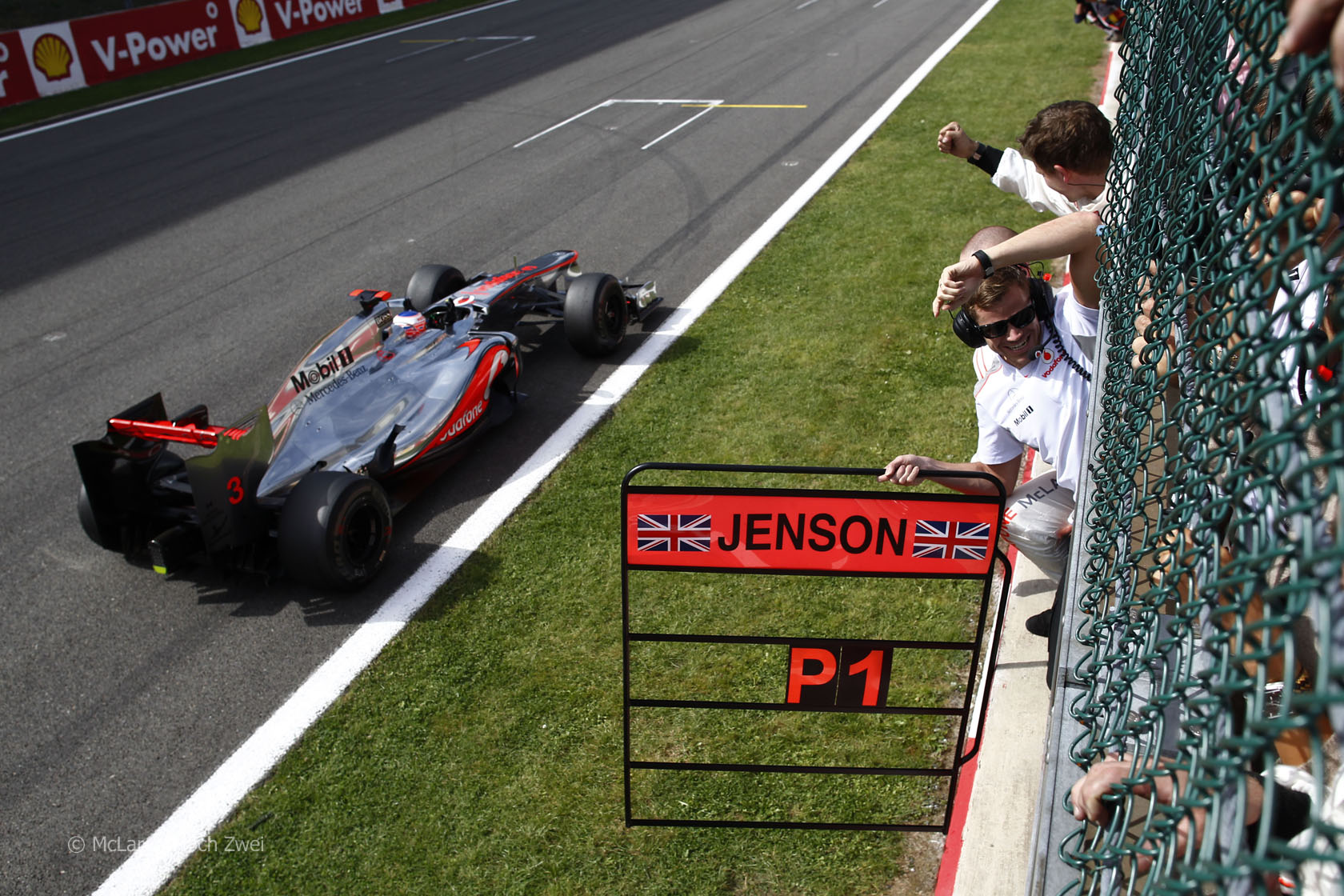 Jenson Button was voted Driver of the Weekend following his second victory of 2012 in the Belgian Grand Prix.

Over a fifth of readers voted for Sebastian Vettel, who took second, and Nico Hulkenberg placed third.

Here’s what F1 Fanatic readers had to say about the top drivers of the Belgian Grand Prix weekend.

With much of Friday running lost due to rain, McLaren’s had just a single hour of practice to decide whether to use their new low-downforce rear wing.

Jenson Button plumped for it while team mate Lewis Hamilton chose a higher-downforce rear wing. The difference between the two proved crucial and Button clinched his first pole position since 2009.

On race day he duly produced his second win of the year with an emphatic lights-to-flag drive.

Button was exquisite all weekend long. He put three amazing laps in qualifying, he led every lap with excellent pace and he was a couple tenths short of a grand slam. If he can continue to deliver such performances he can be a championship contender.
@Dimitris-1395

I don?óÔéĽÔäót see any other option than Jenson this weekend. Drove three pole laps on saturday and lead the race from start to finish with almost all the time a gap of 10 seconds + behind him. My vote goes without any doubt to him.
@CUatFinish

Difficult choice between Hulkenberg and Button. I normally would be tempted not to give it to somebody like Button, but such was his margin over everybody in both qualifying and the race, particularly in a close season which hasn?óÔéĽÔäót seen a single dominant victory quite like it until now, that I think it has to go to him.

Unlike Hulkenberg, it is difficult to imagine that the race would have gone any differently even if the first corner shunt hadn?óÔéĽÔäót happened. Hulkenberg, despite a hugely impressive performance where he did mix it with some faster cars at times, could have easily been in the lower reaches of the points had that crash not happened.
@Matt90 For the second time this year, Vettel failed to make it as far as Q3. But he was in rare form in the race.

The Red Bull’s poor straight-line speed hampered his ability to make passes in the DRS zone. But his superb commitment through Blanchimont allowed him to make up places at the chicane, and opened up the way for an excellent recovery drive to second.

Voted for Vettel. Not my favorite driver, but he displayed a level of controlled aggression when overtaking that was pretty brilliant.
@F1Americana

It was a hard one. Button drove a faultless Grand Prix. And Vettel drove brilliantly in the race. He was arguably the fastest man in the race.

Having seen the race from Eau Rouge (lucky me, yes!) Button?óÔéĽÔäós race was great but looked like a walk in the park (thanks to his own qualifying).

I voted for Vettel. Could?óÔéĽÔäóve done better in qualifying to get into Q3, and he was unlucky at the start to actually lose a couple of places. But he drove an impressive race with some great overtakes, and managed a one-stopper.

On Sunday, he really grabbed every opportunity with both hands, took advantage of retirements and finished ahead of everyone that was beatable. In that respect he really reminded me of what Alonso?óÔéĽÔäós been doing this year and I feel this was one of Vettel?óÔéĽÔäós best races.
@Enigma Hulkenberg emerged from the midfield scrap to claim a best-ever finish of fourth, passing Michael Schumacher on the outside at La Source along the way.

This was a tough one, Button had an amazing weekend, top notch in choice of setup and qualified superbly. But he had nothing to do in the race but stay out front and protect his tyres. Admittedly that?óÔéĽÔäós not the easiest thing!

Hulkenberg also had a good although not spectacular qualifying, but he had an amazing race. Battling with the top guys, keeping his car in the fight and being very clean out on the track.

I went with Hulkenberg because when an opportunity arose for him to be noticed he grabbed it with both hands and put in a strong performance.

Honorable mentions to Vettel who drove a blinding race and Raikkonen for that brilliant pass on Schumacher.
@JenniKate

Hulkenberg and Vettel managed to perform above the capabilities of their cars despite their rather poor qualifying efforts, one of them being, by comparison of the technical package, a bit more impressive than the other. So Hulkenberg for me.
Antonio Nartea (@tony031r)

I went for Hulkenberg because I just couldn’t believe that he had the pace to defend his fourth position. Mightily impressed.
@Rahultajay

Here are some of the reasons readers gave for voting for other drivers:

Button produced a world champion drive on Sunday, coming close to a grand slam. The fact that his win was the first lights-to-flag this year really accentuates the brilliance of his drive. With these accolades, one would naturally assume I gave Button the award for “driver of the weekend”. Instead, I gave it to someone else.

Jean-Eric Vergne has outqualified Daniel Ricciardo for the last two races, and having done so at the drivers?óÔéĽÔäó track of Spa against Ricciardo (the “qualifier of the two”), it?óÔéĽÔäós an accomplishment in itself. His points-scoring finish (obviously helped by the nasty pile-up at the start) ahead of Ricciardo and his gutsy overtake on Nico Rosberg are all reasons why I gave the vote to Vergne.
@Portugoose

I?óÔéĽÔäóve chosen to vote for Kobayashi, the unsung hero of the weekend whose race was ruined through no fault of his own. Despite all that he has done during his short career, Kobayashi is still underrated.
@Montreal95

For me it has to be Schumacher. He drove a brilliant first stint but again a mistake be Mercedes putting him on a one stop strategy trashed his chances. If they had gone with a two stopper he could have battled for third or even second.
@Force-Maikel

Button made his fourth appearance in the Driver of the Weekend top three, Vettel his third – all of which have been second places.

Hulkenberg featured in the top three for the first time this year.