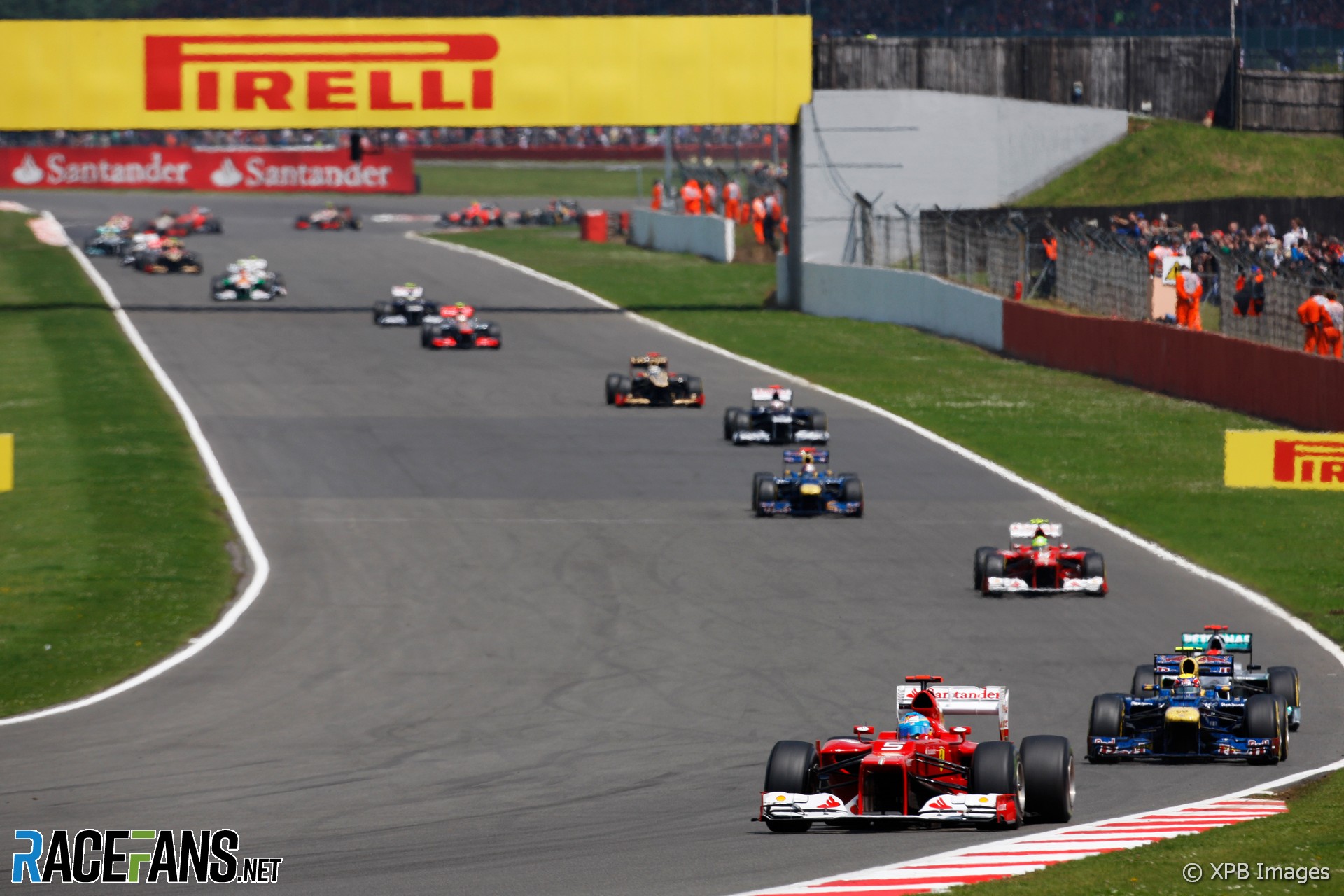 Mark Webber lost pole position to Fernando Alonso by a tiny margin at Silverstone on Saturday.

But Webber turned the tables on race day, chasing down and passing Alonso to score his second victory in the British Grand Prix.

Against all expectations, the clouds parted and the sun shone through as the cars formed up on the grid for the start.

Alonso was wise to the threat from Webber right from the start. When the red lights went out he chopped decisively across the front of the Red Bull.

The Ferrari driver led on the run into Village while Sebastian Vettel fended off Kimi Raikkonen. The other Lotus of Romain Grosjean made slight contact with Paul di Resta – the Force India spun out with a puncture while Grosjean headed to the pits for a new front wing.

Alonso got his head down and began to edge away from Webber. He in turn left third-placed Michael Schumacher behind but the Mercedes driver couldn’t shake a growing train behind him.

Felipe Massa took a few looks at the Mercedes while Vettel tried to take advantage and pass the Ferrari. Pastor Maldonado briefly appeared in sixth after elbowing Raikkonen aside, but was later re-passed by the Lotus.

The other Lotus of Grosjean shaped the opening phase of the race. Having pitted for his new front wing and began to pick off the stragglers, the front-runners were increasingly wary of his progress.

Red Bull were first to react, bringing Vettel in to get him out from behind Massa. But no sooner had they done that Massa squeezed past Schumacher for fourth.

The pursuing drivers responded to Vettel’s pit stop, beginning with Maldonado and Perez. The Sauber driver emerged on the tail of the Williams and Maldonado moved to cover the inside line on the approach to Brooklands.

Perez moved to the outside to pass but as the pair went into the corner Maldonado lost the rear of his car and hit Perez. An aggrieved Perez, who had also been hit by Maldonado during practice in Monaco, accused him of having “no respect” for his competitors.

The use of DRS was temporarily suspended while the yellow flags were out at Brooklands, which marked the end of the DRS zone. But at this point most drivers were busy with their first pit stops.

An exception was Lewis Hamilton, who like Alonso had started on the hard tyres. When the Ferrari driver pitted Hamilton briefly took the lead and was still lapping well enough on his worn tyres to be taking time out of those who had been in front of him.

But Hamilton lost time defending his lead from Alonso – the Ferrari driver took him in The Loop and although Hamilton briefly took the place back at Brooklands he had to yield to Alonso’s evidently quicker Ferrari.

Hamilton’s pit stop restored Webber to second place ahead of team mate Vettel followed by Massa. Raikkonen and Hamilton jumped ahead of Schumacher through their pit stops.

The front runners held their position through their second pit stops but the change of tyres proved decisive. While Red Bull returned to hard tyres for their final stint, Ferrari left their soft-tyre stint until last.

This left Alonso vulnerable in the closing laps as he, like several drivers before him, weren’t able to get the best performance out of the tyre. Webber began edging into his lead and had the Ferrari in his sights with half-a-dozen laps to go.

At first Webber thought Alonso was “playing with him” and would pick up the pace as soon as he got within range. But these weren’t games from Alonso – as in Valencia, he didn’t quite have the performance he needed in the final laps.

Unlike in Valencia, he had a driver behind him ready to take advantage. On lap 48 Webber came out of Aintree hard on Alonso’s tail, used DRS to draw alongside him and completed an around-the-outside pass at Brooklands to clinch the place.

However Alonso still had enough in hand to keep third-placed Vettel at bay. Behind them, the other Ferrari of Massa was receiving attention from Raikkonen but the Lotus driver lost time running wide on the penultimate lap.

Behind Raikkonen was, surprisingly, his team mate Grosjean, Despite having pitted early for a new front wing and run a very long final stint, Grosjean was still setting fastest lap in the closing stages.

Schumacher was seventh ahead of Hamilton. The McLaren driver used his soft tyres in the middle stint and was perplexed to end up back where he started, unable to keep the resurgent Grosjean behind him.

Hulkenberg defended ninth from Senna before finally succumbing at Brooklands on the penultimate tour. The Force India driver tried to wrest the place back at Copse but succeeded only in losing the final points place to Button.

A chastened Kamui Kobayashi inherited 11th – he had collided badly with his pit crew earlier, sending two of them to the medical centre with fortunately minor injuries.

The Toro Rosso pair were next ahead of Nico Rosberg, languishing in 15th. Maldonado ended up 16th, 9.3 seconds ahead of Heikki Kovalainen. The other Caterham of Vitaly Petrov didn’t even start the race due to an engine problem.

Timo Glock and Charles Pic were 18th and 19th for Marussia, though the team surely took more pleasure from the news of an improvement in the condition of injured test driver Maria de Villota, who was reported as conscious and talking to her family before the race. The HRTs filled the final place.

Webber’s second victory in the British Grand Prix narrows his deficit to Alonso in the drivers’ championship to 13 points. But Ferrari move up to second in the constructors ahead of Lotus and McLaren.

For the latter, their upgrade package planned for the next round in Germany can’t come soon enough.