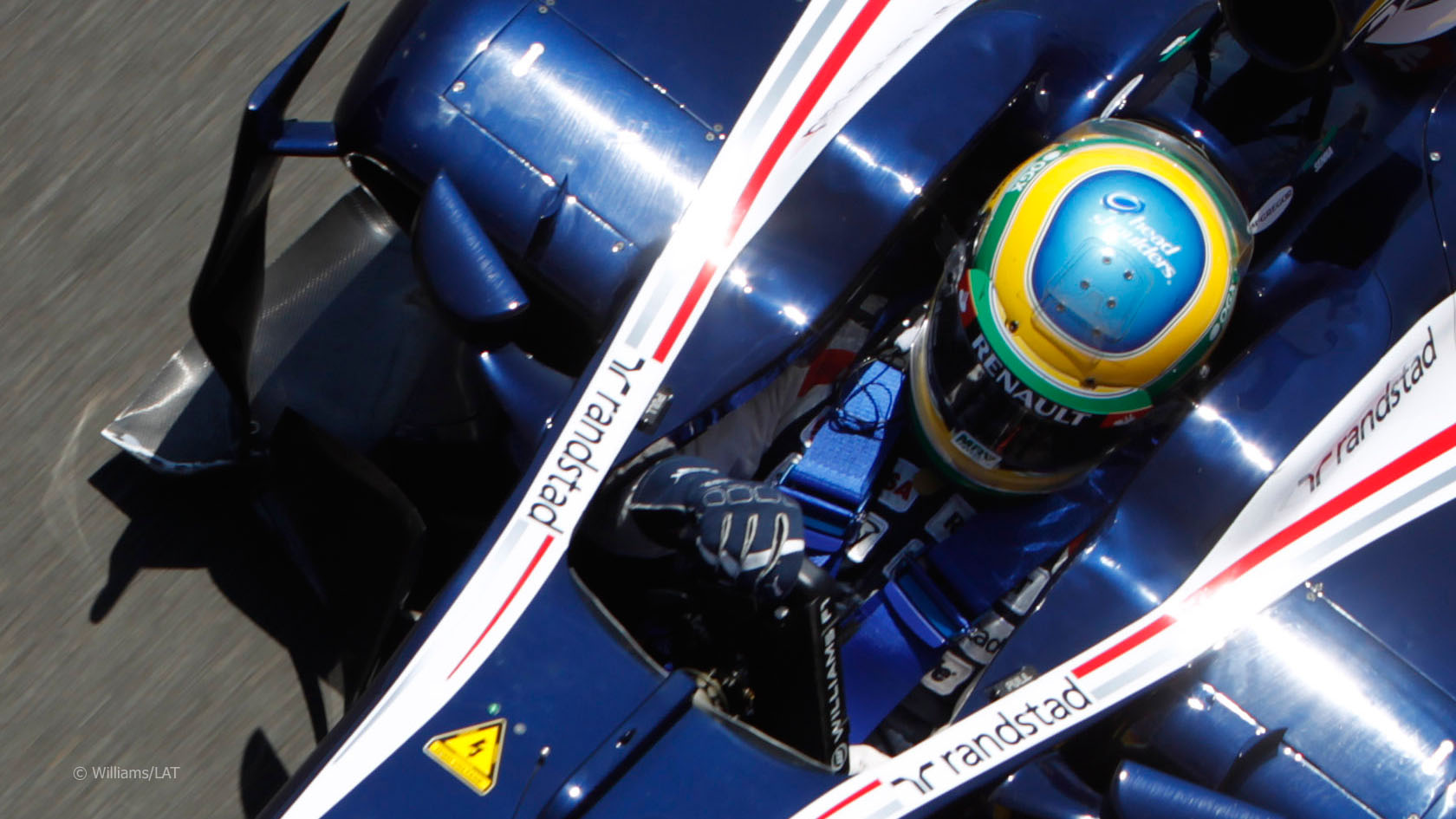 Bruno Senna heads into this weekend’s British Grand Prix after a frustrating race in Valencia.

A collision with Kamui Kobayashi dealt a double blow to his chances as it damaged his car and he was hit with a penalty for the collision.

It wasn’t the first time this year Senna found himself running a long first stint in an attempt to gain places, leading to a tangle with another car on fresher tyres. Much the same happened with Michael Schumacher in Spain.

“Qualifying has become a bit of a speciality” F1 Fanatic spoke to the Williams driver ahead of this weekend’s race. He explained the thinking behind the strategy: “Our car permits us sometimes to run longer on the tyres. That normally allows you to gain positions on the track.”

But, he admitted, “it is also because of not qualifying so well. Sometimes we need to jump a lot of positions and take more risks.

“If you’re in front you want to do the safest strategy. But I’ve been struggling a bit in qualifying. In the race normally I’ve been strong, so we’ve been having to push a little on that side of things.”

Senna admitted he’s still getting to grips with how the current generation of tyres have to be treated on a single, flying lap: “Qualifying has become a bit of a speciality with the Pirelli tyres.

“Last year everybody was learning, it was everybody’s first time with these tyres. I qualified pretty well three times last year in random conditions.

“This year everybody knows the tyres better so on the tracks I haven’t been to it’s more difficult to qualify perfectly.

Qualifying poorly has led to him running longer first stints. “Sometimes it works, sometimes it doesn’t,” says Senna. When it doesn’t “you get someone very frustrated behind trying to overtake”.

While Senna went out in the tangle with Schumacher in Spain, Maldonado was on his way to victory. Senna said he can learn a lot from his team mate: “Pastor is very quick, very consistently quick as well.

“I think [he’s] a great reference to have right now because I need a good team mate now to learn as quickly as possible, even though sometimes it’s tough because you’re a step behind and have to make up for lost time.

“It’s still very good to have Pastor as my team mate. I’m learning a lot with his telemetry and his data and catching up.”

“This is my first real season in F1”

Surprisingly, this weekend’s race will be Senna’s first in an F1 car at Silverstone. During his maiden season with HRT he missed the British round as the team put Sakon Yamamoto in the car:

“I think people have the concept that I have been in Formula One for three seasons, and I haven’t. This is my first real season in Formula One. Last year, of course, I had a few good races but 2010 was more fighting to survive than anything else.

“And definitely it’s going to be a big challenge driving at Silverstone. Last time I drove there was 2008. Saying that, I had a pretty good race there last time so I’m looking forward to it.”

He adds he’s “really hoping that we can give the team a good home race.” but admits the field is very close at the moment:

“I think the car is very competitive on high downforce tracks,” Senna said. “We’ve been devloping more and more but for sure it’s not going to be easy for anyone.

“We’re going to see a lot of cars being competitive for the weekend. And I think there are quite a few people who are as competitive as us.

“So it is a lottery in terms of who’s going to win. But we know that we can be strong so we’re going to push very hard.

“We’ve been pushing very hard from the beginning of the season on the low-speed aero performance. It sounds very contradictory, but you spend most time of the lap in low-speed corners so we’ve been focusing on that a lot and it’s been working very well.

“So that’s why we’ve had a nice jump in the corners. But also the car has to be good in high-speed and the new upgrade package has a bit of focus on that.”

Williams are unusual in that reserve driver Valtteri Bottas only ever drivers Senna’s car – not Maldonado’s. So do both cars get the same upgrades at the same time?

“We try to give both drivers the same opportunity,” Senna explained. “So normally whenever a car races something the other one has the same chance.

“But there’s also incidents and sometimes limited number of parts. So because sometimes you’re racing hard and you break parts and you have to use another spec of parts. I think normally when they develop they’re thinking for both cars.”