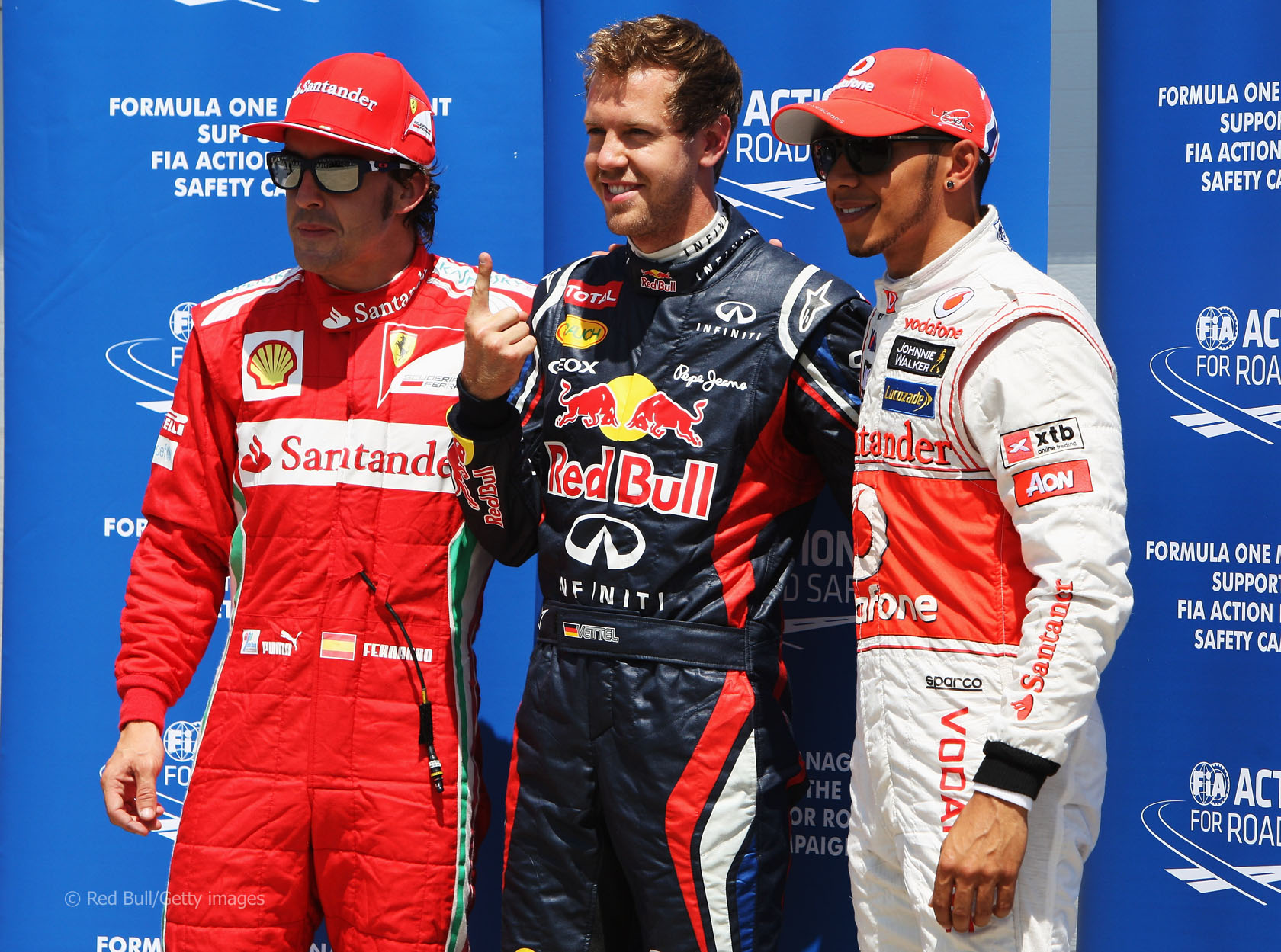 Red Bull have been forced to remove holes from their floor and change their wheel hubs in the past two weeks – but it didn’t stop them being quickest in qualifying in Canada.

Sebastian Vettel led qualifying every step of the way and claimed pole position for the second year in a row in the Canadian Grand Prix.

Lewis Hamilton took second on the grid ahead of Fernando Alonso.

As qualifying began under clear skies, temperatures at the track had climbed to their highest so far during the weekend, passing 40C.

The drivers found the tyres gave their best performance after several laps. Vettel began his run late and stayed out on softs, setting a best of 1’14.661.

As usual the Caterhams, Marussias and HRTs were eliminated, but there were a few changes in the usual order. Both Heikki Kovalainen and Vitaly Petrov out-qualified Jean-Eric Vergne, who was over a second slower than his team mate.

Several of the front runners made late runs on super-soft tyres in case of sudden improvements by the slower drivers, but few found it necessary to improve their times and returned to the pits.

Vettel led the times again in the second session, setting a 1’14.187 which put him out of reach of Hamilton by over a tenth of a second.

Alonso split the pair with a late lap in the Ferrari. He pitted, joining them along with Webber, Schumacher and Rosberg as the rest made final attempts to reach Q3.

Grosjean fell short with his first effort but had just enough time to start a final lap. That proved crucial as he crossed the line with a 1’14.627 to take seventh. Massa was also safe with a 1’14.641.

For the third weekend in a row Button’s time looked vulnerable – his lap of 1’14.680 left him tenth and Pastor Maldonado was on a hot lap. The Williams driver was fastest in the first sector but as he came out of the final corner he clipped the wall and spun.

That let Button off the hook and condemned Maldonado to elimination along with his team mate.

Daniel Ricciardo produced an excellent lap for 14th ahead of Sergio Perez.

The other Sauber of Kamui Kobayashi missed the final ten by the tiny margin of eight thousandths of a second.

Vettel’s first lap in Q3 was quick enough for pole position. But with Hamilton and Alonso looking quick, he returned to the track for another effort.

He lowered his best to a 1’13.784. Hamilton came closest to beating him but he was still over three-tenths of a second slower.

Alonso began his last lap with a first sector that was fractionally faster than Vettel’s. But he lost time over the rest of the lap and ended up third. He will share the second row with Mark Webber.

Nico Rosberg made it four different constructors in the top five, followed by Felipe Massa.

Paul di Resta did a single run which was good enough for eighth behind Grosjean.

Behind them were Schumacher, who crossed the start/finish line too late to begin his final lap, and Button, who set his time on softs instead of super-softs.