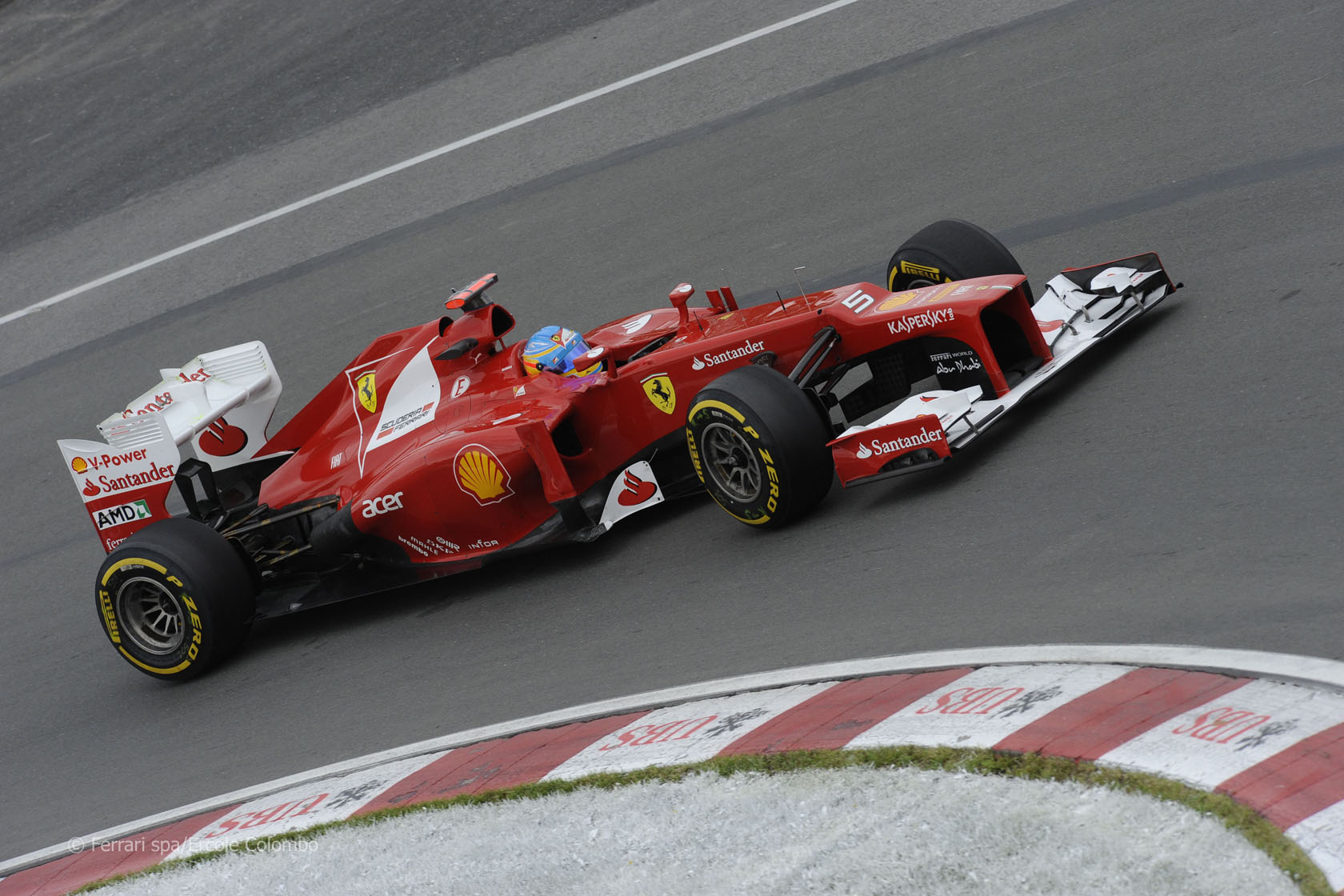 Lewis Hamilton was fastest in both practice sessions on Friday.

Although he edged Fernando Alonso by just 0.0.054s in the second session, the sector times reveal he has a few more tenths in hand.

Nonetheless he is wise to the threat posed by the ever-improving Ferrari F2012: “If you look at the race pace, Ferrari look very, very quick and their tyre degradation seems to be better. We have to be careful of them.”

Ferrari have brought further upgrades to their car this weekend including a revised exhaust exit arrangement similar to McLaren’s.

Technical director Pat Fry said: “We brought two different exhaust configurations here: one was the one used in the last two races, the other represents our latest interpretation of the concept that was part of the car when it made its debut in Jerez.

“From what we could see today, the latter configuration seems to be positive in terms of performance even if, obviously, we need to analyse the data very carefully to make the right choices for the race.”

Track temperatures are expected to climb throughout the weekend in Montreal. On Friday, in fairly cool temperatures, drivers were able to run fairly long stints without experiencing a significant drop-off in performance.

Lewis Hamilton’s longest stint in the second session (above) was 19 laps, and his fastest lap in that stint was his last one.

With Sunday’s race distance set at 70 laps, this raises the possibility of drivers making a single stop for tyres.

Sergio Perez was especially pleased with his car’s performance over a race stint: “My car is very well balanced on a high fuel load, but we need to improve it for qualifying conditions, as we haven?óÔéĽÔäót got that right yet.

“However, I have the feeling we can be quite competitive here, and I am really looking forward to my first qualifying and race on this track.”

The performance gap between the two compounds is quite narrow. Pirelli say the super-soft is 0.4-0.7 seconds faster than the soft.

Those who tried the super-soft tyre in the first session found it particularly difficult to improve their times. It seemed easier for those who ran the super-soft in the second session, when track conditions had improved.

Hamilton was on it from the word go in Friday practice, leading the times sheets throughout most of the two sessions.

He believed he could find more time on his super-soft tyres in the second session, and was on course to do so before the red flags came out because of Bruno Senna’s crash. The sector times reveal he’s found another quarter of a second.

The sector times reveal there’s very little to choose between the two Ferrari drivers – just two-hundredths of a second separate the pair of them. Felipe Massa looks much more confident:

“The car seems to be well balanced and it seemed to me to be pretty consistent in terms of performance, even if, obviously, the track is not yet providing much grip, this being the first day of the race weekend. To sum up, this has been the best Friday of 2012: let?óÔéĽÔäós hope that can continue through Saturday and Sunday as well.”

Lotus came into this weekend concerned about their performance on the low-grip track and that seems to have been borne out in practice so far. But Raikkonen expects them to improve as temperatures go up:

“I’m not 100% happy with my set-up and I think we?óÔéĽÔäóre missing a trick somewhere. It?óÔéĽÔäós not a major issue, but I know we can go faster. Let?óÔéĽÔäós see how it goes tomorrow, anything can happen and hopefully it?óÔéĽÔäós a little warmer as that usually seems to help.”

Red Bull and Mercedes were among those who ran the super-soft tyres in first session, expecting rain to fall in the second. They likely would have gone more quickly in the second session on super-softs, so they are likely more competitive than they appear.

A surprising name appears at the top of the speed trap chart – Pedro de la Rosa in the HRT. The team have a very skinny rear wing for this race and a slipstream may have helped him set the highest straight-line speed.

But HRT look capable of getting on terms with their closest rivals this weekend. De la Rosa said: “We were quicker than the Marussias in the morning and the afternoon but both the car and myself can improve. The rise in temperature expected for tomorrow is good for us we?óÔéĽÔäóre struggling to heat up the tyres in the last sector and that will help us.”