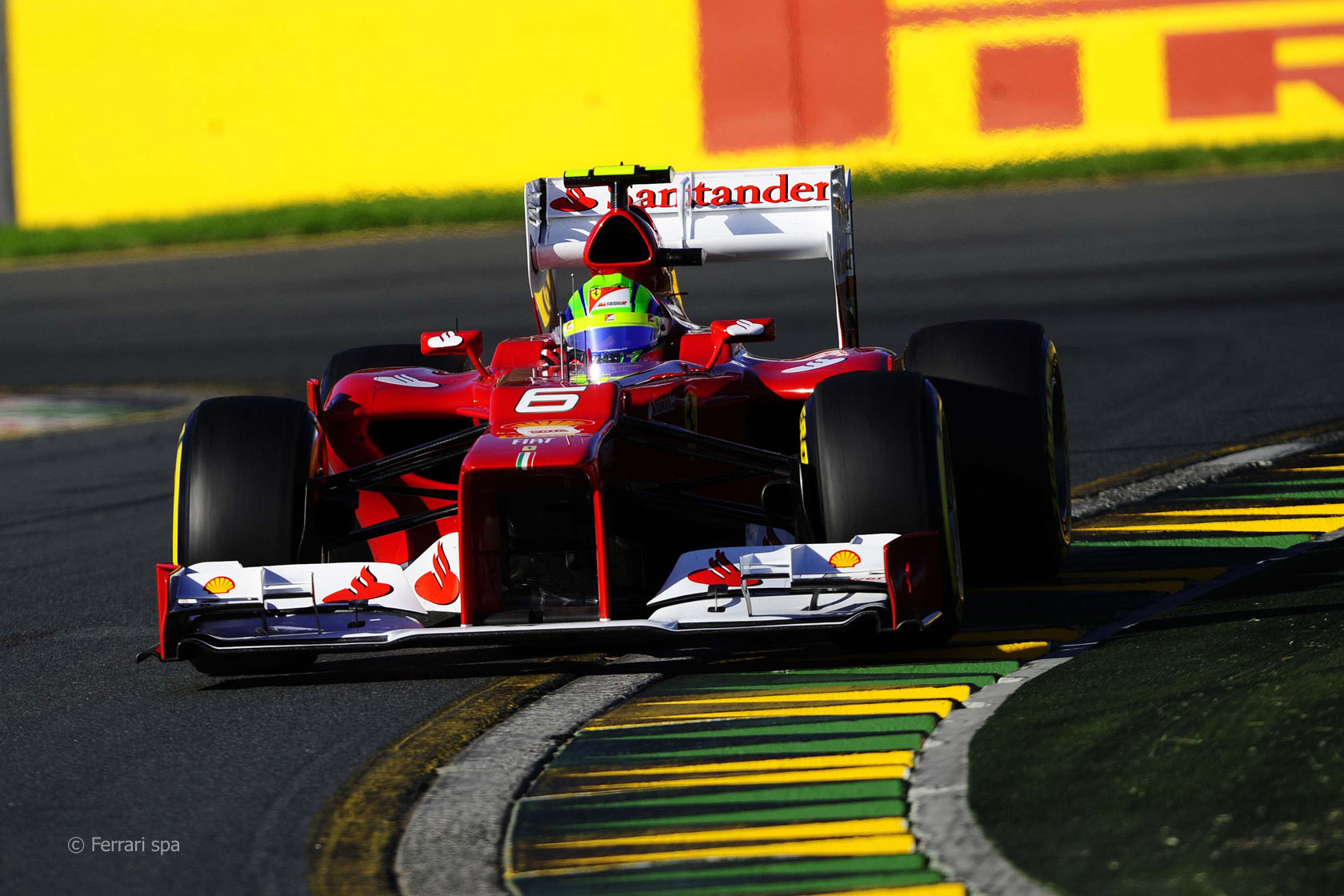 Felipe Massa says the gap between himself and team mate Fernando Alonso has come down since the start of the season.

In a Q&A published on Ferrari’s website, Massa said: “I think that this year, the only race where there really was a big difference between me and Fernando was in Australia and then, in Malaysia the rain made it more complicated to get a clear picture.

“Starting in China, the difference in qualifying between the two of us was not so dramatic. Even in Barcelona, but for the traffic, my time in Q2 was in line with previous events and on Sunday my pace was not that far off.

“I think we must also take into account that, at the moment, Fernando?óÔéžÔäós driving is amazing: he is on super form, maybe even perfect.”

Massa lost time in Spain with a drive-through penalty after the stewards found he had gone too quickly while a yellow flag was out. Massa said: “I am bloody p***ed off.

“Even today, I still struggle to understand the reason for the drive-through and that was the point at which my race was ruined.”

“In Spain we made a significant improvement”

Massa admitted he is still finding the F2012 a handful despite the team’s progress with the car: “It?óÔéžÔäós definitely not a very easy car to drive and it?óÔéžÔäós hard to find a good balance.

“Many times I have found myself having to fight the car and, in these circumstances, it?óÔéžÔäós easy to lose a tenth here and there: with my driving style maybe I struggle a bit more, because I don?óÔéžÔäót manage to find a smooth way of driving.

“Then, it?óÔéžÔäós well known that we don?óÔéžÔäót yet have enough aerodynamic downforce and we are lacking in traction at the exit to slow corners, which could be the biggest problem.

“In Spain, we made a significant improvement, which could clearly be seen from Fernando?óÔéžÔäós performance in the race, but I too, when I had a clear track ahead of me, had a good pace. We also made a little progress in terms of top speed, another area where we have suffered right from the start of the season.”

Despite having only scored two points to Alonso’s 61, Massa says he still has the support of the team: “Absolutely, yes, I feel the whole team stands by me.

“Obviously, they are not happy with the results and neither am I: we all want is to get out of this and return to normal. It?óÔéžÔäós possible and for sure it?óÔéžÔäós what I want and I know that with the team?óÔéžÔäós help we will manage it.”

He also commented on the ongoing debate over tyres: “Their influence varies from circuit to circuit.

“In Bahrain and Spain we had high degradation and then the tyres played a decisive role, but at others, where degradation is more within the norm, then I think the quickest car in absolute terms will have the upper hand.

“Having said that, clearly those who do the best job of managing the tyres, have the best strategy and make no mistakes, will have the best chance of winning.”

64 comments on “Massa believes he is getting closer to Alonso”