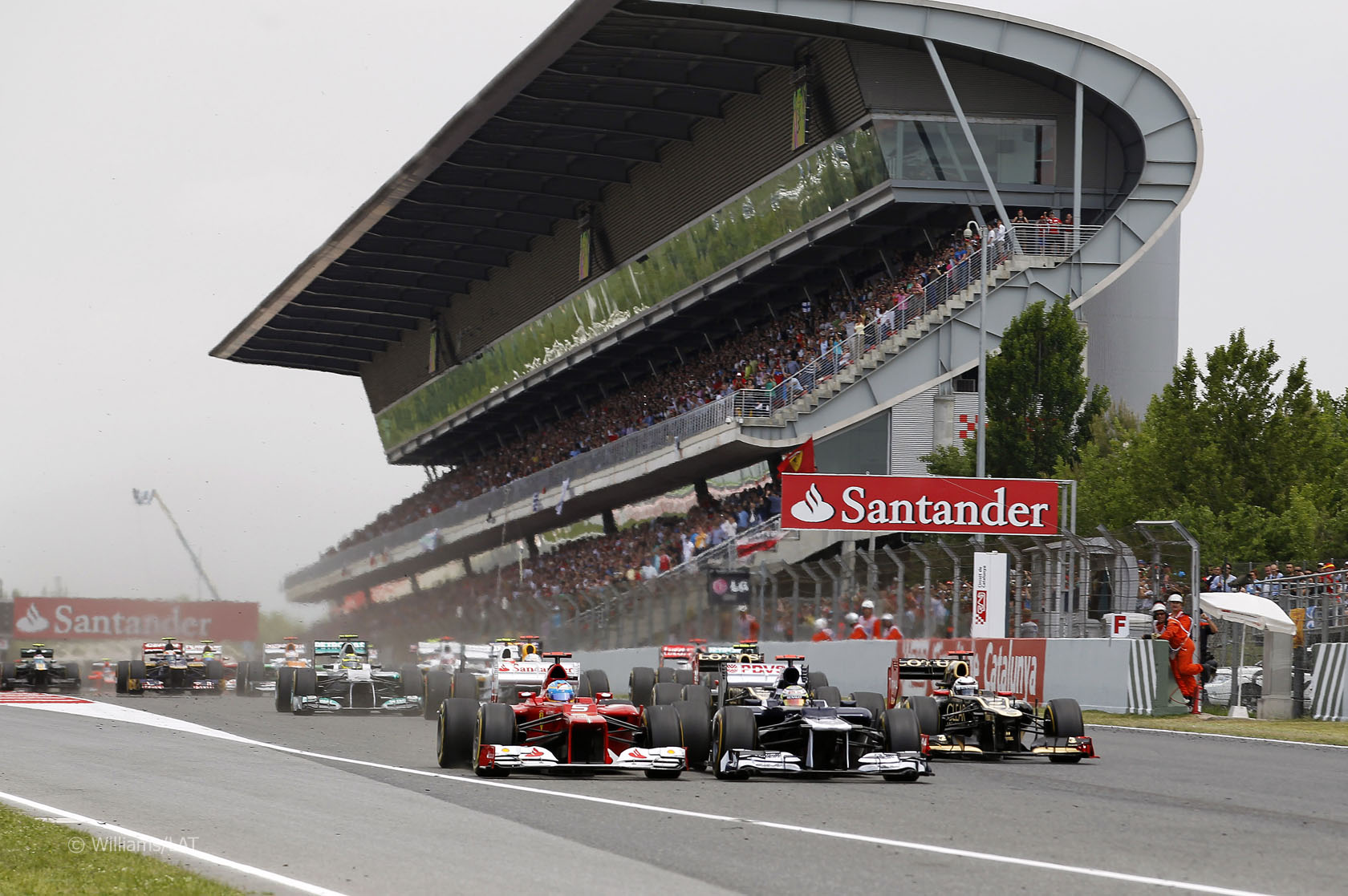 Which F1 driver had the best race weekend in Spain?

Compare all the drivers’ performances below and vote for who you think was the best driver of the Spanish Grand Prix weekend. Sebastian Vettel – Minimised his running in qualifying to save tyres for the race. But a drive-through penalty for failing to slow sufficiently for yellow flags dropped him back into the pack. Passed Rosberg and the McLarens in his final stint to claim sixth, but it looked like fifth was the best he had on offer.
Mark Webber – His single run in Q2 was not good enough for him to reach Q3, so the pole sitter of the last two Spanish Grands Prix started 11th. Lost a place at the start, then pitted early in an attempt to make up ground. Like his team mate, his progress was slowed by front wing damage, necessitating a replacement. Couldn’t get past Hulkenberg for the final point at the end.

Jenson Button – Didn’t look comfortable in the McLaren at any point during the weekend. Missed Q3 and had a quiet race, finishing behind his team mate who had started last.
Lewis Hamilton – Faced with the sort of frustration that led to some of his worst performances last year, Hamilton responded commendably well. Relegated from first on the grid to last through no fault of his own, he took places when they were on offer and stayed his hand at other times, preserving his tyres. Was the only driver to complete the lap with two stops and even another McLaren pit stop blunder didn’t put him off his stride.

Fernando Alonso – The Ferrari looked a much more competitive proposition in Spain – at least, in Alonso’s hands. Out-qualified the Lotuses and snatched the lead at the start. But slipped behind Maldonado in the pit stops and, despite getting close, couldn’t quite take it back. Shares the lead of the championship with Vettel.
Felipe Massa – Over half a second off his team mate in qualifying, for which he blamed traffic, Massa started 14 places behind the other Ferrari. Disputed his penalty for speeding under yellow flags which dropped him behind Paul di Resta. He finished there, lapped by Alonso.

Michael Schumacher – Scraped into Q3 and moved up two places at the start to hold sixth, pressuring Romain Grosjean. But after Grosjean passed Senna and began to pull away, Schumacher’s eagerness to pass got the better of him and he ran into the back of the Williams. The stewards docked him five places on the grid for the next race.
Nico Rosberg – Couldn’t make the tyres last in his final stint and was passed by Kobayashi and Vettel. Had the race been 67 laps long instead of 66 he would have lost out to Hamilton too. Kimi Raikkonen – Out-qualified by Grosjean but moved ahead immediately at the start. Said after the race the car had the potential to win but they didn’t get the strategy right. Spent the final stint reeling in Alonso for second place, finishing 0.6 seconds behind.
Romain Grosjean – Not for the first time this year he didn’t make best use of a good grid position. Quickly passed Senna and Rosberg after his first pit stop to take up fourth. Like Raikkonen, made a late final pit stop and was flying at the end, setting fastest lap.

Paul di Resta – There wasn’t much to choose between the Force Indias in qualifying. In the race the team felt they’d underestimated how well the tyres would last and Di Resta fell from 12th to 14th.
Nico Hulkenberg – Like his team mate in the last race, Hulkenberg had to cling on to his points finish, holding off Webber by two-tenths of a second for his second points finish of the year.

Kamui Kobayashi – Thwarted by an hydraulic problem in qualifying which prevented him from setting a time in Q3, Kobayashi held onto his ninth place at the start. A bold pass on Button halfway through the race allowed him to claim fifth, building up enough of a gap to stay safe from the recovering Vettel.
Sergio Perez – Started a career-best fifth but clipped Grosjean at the start and collected a puncture which destroyed his race.

Daniel Ricciardo – No Q3 heroics this weekend – in fact he was out-qualified by his team mate for the first time this year. He and Vergne were closely-matched in the race until the final dozen laps, when Ricciardo began to drop back.
Jean-Eric Vergne – Finished five seconds ahead of his team mate as he lost performance sharply in the final laps. Nonetheless he finished ahead of Ricciardo for the fourth race in a row. Pastor Maldonado – Only 14th-fastest on Friday but said he was feeling confident. He was second-fastest in final practice and repeated the feat in qualifying before Hamilton’s penalty handed him his first pole position. Lost the lead to Alonso at the start but an aggressively early second stop got him ahead again. After that he withstood considerable pressure to deliver his first win and Williams’ first since 2004.
Bruno Senna – The contrast in fortunes between the Williams drivers was especially stark on Saturday as Senna spun out during Q1. In the race he delayed his first pit stop, moving up to seventh. On lap 12, shortly after being passed by Grosjean, he was rammed out of the race by Schumacher.

Heikki Kovalainen – A mistake in qualifying left him behind his team mate on the grid. But he passed Petrov at the start and finished the race 15 seconds ahead. He was 24 seconds behind the next car which, for the second time this year for Caterham, was Massa’s Ferrari.
Vitaly Petrov – Caterham did not run their new exhaust set-up in Spain, but despite that Petrov was three-tenths off Senna’s time in Q1. He wasn’t happy with his KERS map in the race and steadily dropped back from his team mate.

Pedro de la Rosa – Ran HRT’s new aerodynamic package and briefly stayed in front of Charles Pic at the start. Crossed the line in last place but was pleased to see the chequered flag at the Circuit de Catalunya for the first time since 1999.
Narain Karthikeyan – Retired shortly after his second pit-stop with a technical problem.

Timo Glock – Started behind his team mate for the second time after encountering yellow flags on his second run in Q1. Moved ahead at the start and brought the car home 18th, lapped twice.
Charles Pic – Pic had a spin early on in the race and was struggling with a driveshaft problem when Alonso came up to lap him. The stewards found Pic didn’t move aside quickly enough and handed him a drive-through penalty, but his car’s problem had already become terminal by then.

Who was the best driver of the Spanish Grand Prix weekend?

What did you think of this weekend’s race? Give your verdict here: