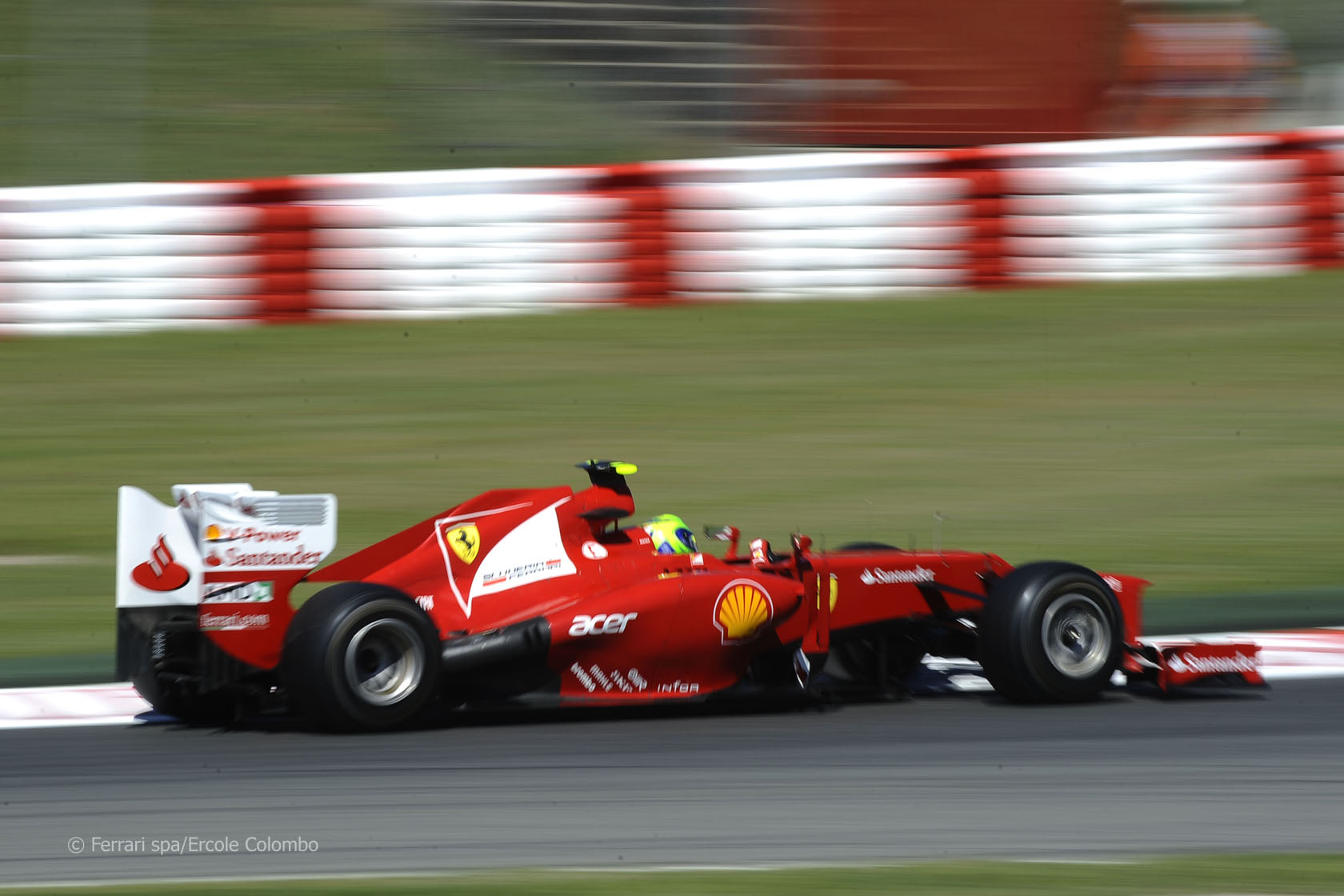 Ferrari appear to have made a step forward with their car and Fernando Alonso said his first impression of the changes was “positive”.

As usual Lotus kept a low profile but they appear to have a quick car this weekend.

McLaren and Red Bull were at the top of the times in the second practice session and are likely to be in contention for pole position on Saturday.

This chart shows all the drivers’ lap times (in seconds) during their longest unbroken stint in the second practice session:

In second practice several teams seemed to made examining their cars’ race stint a higher priority than usual, getting their soft-tyre runs out of the way early on.

Kimi Raikkonen ran a 16-lap stint on the soft tyres and looked able to get at least a dozen laps out of them. Team mate Grosjean said: “The balance felt strong on both tyres and we were able to complete long runs to give us valuable tyre data for Sunday.”

The harder tyres performed much as expected, being considerably slower – by over a second per lap – but much more consistent.

However some drivers struggled to get the best out of the harder tyre, such as Jenson Button: “The [soft] seems to be a bit easier for everyone as it?óÔéĽÔäós softer and therefore more receptive to generating temperature. In P2, we also started to find a way to get the [hard] to work, but then, later in the session, we couldn?óÔéĽÔäót quite get back to that sweet-spot.”

Ferrari had the opposite problem as technical director Pat Fry explained: “The car balance seems to be better on the hards than the softs and that partly explains the fact that we did not manage to significantly improve our times moving from one compound to another, without however forgetting that Fernando was always in traffic when he was on a set of new softs.”

As Lotus demonstrated in Bahrain, saving fresh sets of tyres in qualifying can pay off handsomely in the race. If the soft tyres are durable to do race stints on – and it looks like they are for Lotus – expect to see them reduce their running in qualifying to keep some fresh sets in reserve.

The large performance gap between the two tyres could make Q1 especially interesting. As the slower cars switch to the soft tyres at the end of the session, it may force more of the front-runners than usual to do likewise. Particularly as the gaps between the teams on hard tyres are so small – the top 14 were covered by 1.1s in first practice.

The Lotus’s performance over a single lap was masked by Grosjean caught Felipe Massa and Charles Pic at the end of his lap.

As the sector times show, this may have cost him between three and six tenths of a second – having been quickest in the first sector he was 16th in sector three. The surprising thing is that Raikkonen, whose lap was not impeded, wasn’t much further ahead of him.

Having been fastest in the first session Alonso did not do a clear lap on soft tyres in the second session, so it’s hard to get a read on exactly how competitive the Ferrari is.

Even if only part of that is a genuine gain in performance it points to a considerable improvement in the F2012, though we await tomorrow’s running for solid evidence of their progress.

Alonso said: “First impressions are positive: some parts worked as we expected, others less so, but broadly speaking, it confirms the tendency we had already seen in Mugello last week, which is that the data emerging form the wind tunnel has been been confirmed on track.”

A problem with Pastor Maldonado’s DRS cost him some time in the morning session.

While much attention has been focused on Mercedes’ straight-line speed courtesy of the Double DRS, Lotus have consistently been among the quickest through the speed traps this year, which remains the case here.

Predict the pole sitter and the top five finishers this weekend for your chance to win F1 prizes. Enter here now: