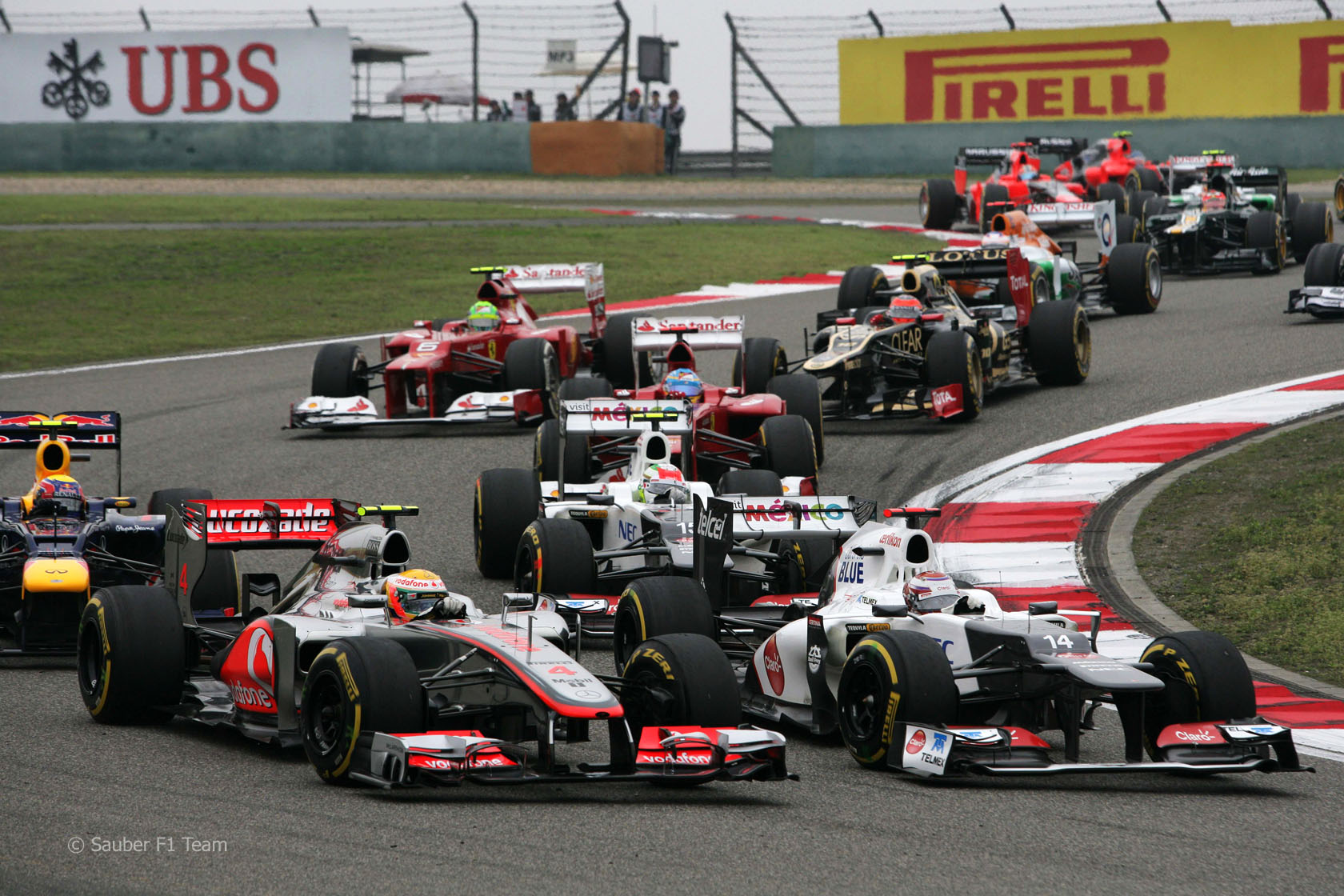 The performance data for the first four races of 2012 reveals the top eight teams in F1 are even closer than they were in 2010.

The three newest additions to the grid have also closed the gap to the leaders, giving us a close and unpredictable season.

Car performance in the first four races of 2012

This graph shows how far each team were off the fastest lap time at each race weekend this year, as a percent. Use the controls below to show/hide different teams. When you compare the graph above to the same data for last season, it’s clear to see how much closer the teams are this year.

In the last two races we have seen the top five or six teams covered by just 1% of lap time. For much of last year the same gap covered half as many teams.

This is unfortunate for Caterham, who were 4-5% off the pace last year (when they were Lotus) and have cut that to 3-4% so far this year, but are still not quite on the pace of the midfield. They are planning to introduce an exhaust upgrade at the Mugello test to close the gap.

The true gap between the fastest and slowest cars may well be smaller – the lower order teams don’t get to run in Q2 and Q3 which usually see better conditions and faster lap times.

One striking details about the three races on tracks which also held Grands Prix last year is that F1 cars have been consistently slower by the same amount this year. Here are the fastest laps of the weekend for these three races:

This is despite Pirelli producing softer tyres compounds this year which should lead to faster lap times.

The slower performance of the cars this year and the tightening up of the field probably share a similar cause: the restrictions on exhaust-blown diffusers, which the likes of Red Bull and McLaren used to such great effect last year. Ferrari diverted resources into their 2012 car early as they struggled last year.

Given that, their performance has been little short of disastrous in the opening four races, never getting within 1% of the fastest time. On two occasions they’ve only had the eighth-quickest car.

They need to make a considerable step forward in this week’s test at Mugello and arrive in Spain well within that crucial 1% mark – ideally cutting the deficit to less than half a percent.

Sauber improved their qualifying pace in rounds three and four as the graph above shows.

However this seems to have been accompanied by a loss in race pace. Their drivers slipped down the order in Shanghai and failed to score in Bahrain.

Have the adjustments they made to the C31 to make it more competitive in qualifying hampered them in the races?

Lotus (who were Renault last year) began 2011 strongly, scoring podiums in the first two races. But their form dipped over the course of the season as they struggled to develop their unconventional front-exit exhausts.

The team have begun this season even more strongly, finishing second and third in the last race. It took them four races to deliver on the potential they showed at the very first round, when Romain Grosjean was only out-qualified by the two McLarens.

The question now is whether the team can sustain that form over the rest of the season. They’re third in the constructors’ championship at the moment, but will surely come under pressure from Mercedes and Ferrari.