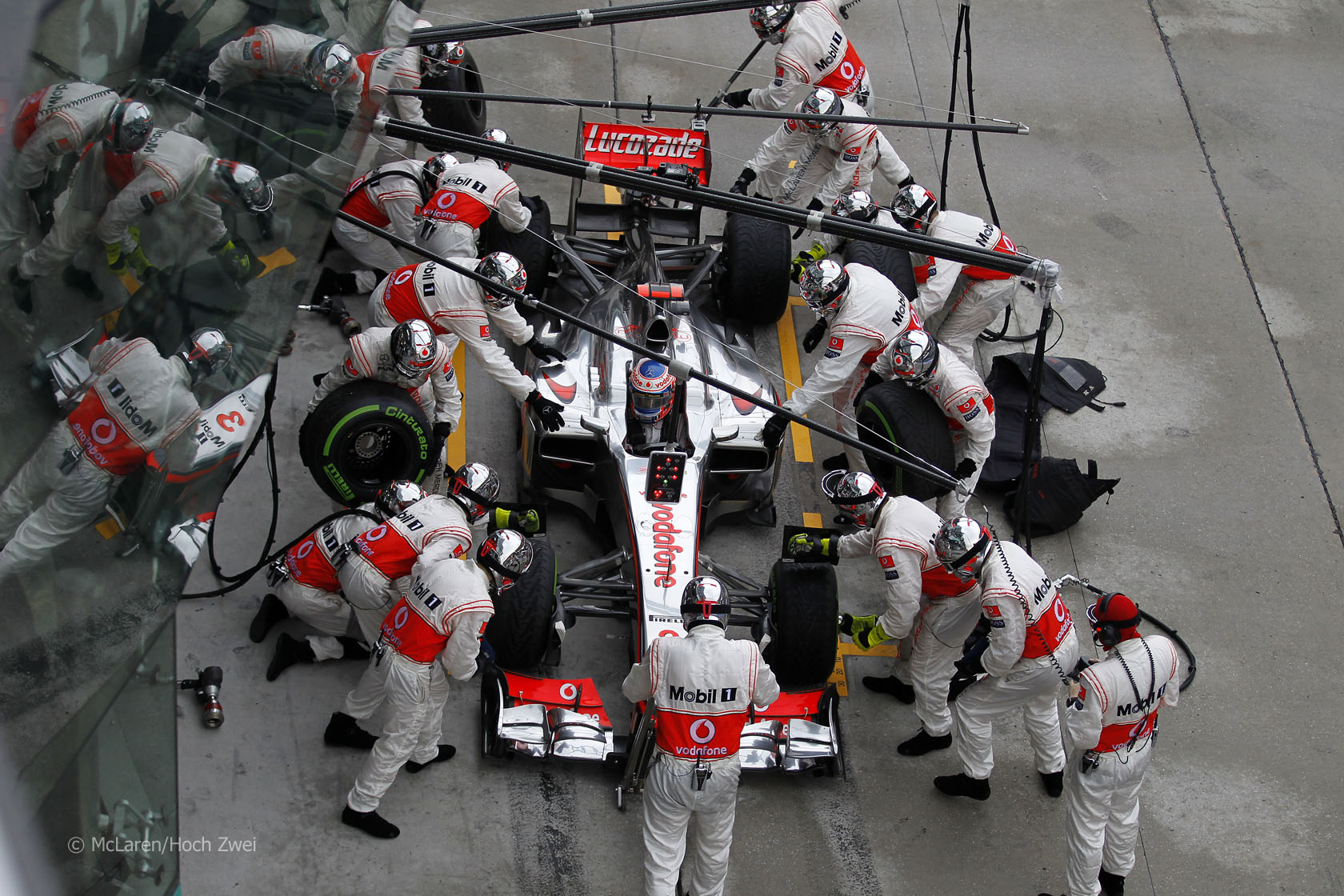 The drivers kept their pit crews busy with a whopping 75 pit stops in Malaysia.

Last week Ferrari were by far the quickest team in the pits, turning round all their pit stops quicker than everyone else.

In wet conditions a quick pit stop time is strongly affected by how well a driver can top on his marks and get away when he is released. That plus quick pit work equals the best stop – and it was Michael Schumacher and the Mercedes team who were the fastest in Sepang.

Consistently quick pit stops from Ferrari helped Fernando Alonso on his way to an improbable win. His lap 14 stop allowed him to leapfrog both McLaren drivers – the corresponding pit stops for Jenson Button and Lewis Hamilton were three and five seconds slower respectively.

Hamilton lost time in this visit as the rear jack did not go on properly and the team had to hold him in his pit box. His lap 41 visit was little better – as one mechanic struggle to remove tape from one of his brakes, Hamilton made an early departure.

Hamilton lost 8.5 seconds to Alonso over his three pit stops – more than half his deficit of 14.5 seconds at the finishing line. “In general, we lost some time in the pit stops and I was pushed out of the fight somewhat,” said Hamilton after the race.

Here are the times for all the pit stops during the Malaysian Grand Prix.

NB. A full list of stationary times is not available.

The choice of which type of slick to use for the final stint was crucial. Alonso opted for mediums, as did the Red Bull and McLaren duos.

Others opted for hards including the Mercedes – who seem to have particularly high tyre degradation – and Raikkonen.

And, most significantly, Perez, who found good enough grip on them to hunt Alonso does over the final laps.

In Melbourne last week Martin Whitmarsh reiterated that McLaren – like several other teams – give priority to their leading driver on pit calls when they’re running close together.

So why, one might ask, did Button pit first out of the two McLarens during the first two rounds of pit stops in Malaysia, when he was close behind his team mate?

The reason why teams give priority to their leading driver on pit calls is to avoid moving the following driver ahead through the benefit of the ‘undercut’ in dry conditions. The first driver to change tyres in dry conditions can gain several seconds by being the first to take on fresher tyres.

In wet conditions that does not necessarily apply, and so nor does the policy of giving the first call to the leading driver. Plus, the teams have other, more pressing considerations in wet weather races.

When the track is wet, the driver’s assessment of conditions plays a larger role in deciding when to change tyres and what to put on. The tactics which are a major consideration in ‘normal’ dry races – such as when to pit to avoid coming out behind a rival, which the driver cannot judge – decrease in importance because the penalty for being on the wrong tyre at the wrong time can be huge.

In both situations today Button made an earlier call than Hamilton to change tyres. This might simply be because Hamilton feels more comfortable with the car’s handling in wet conditions – note his superb time on intermediate tyres on lap four mentioned earlier.