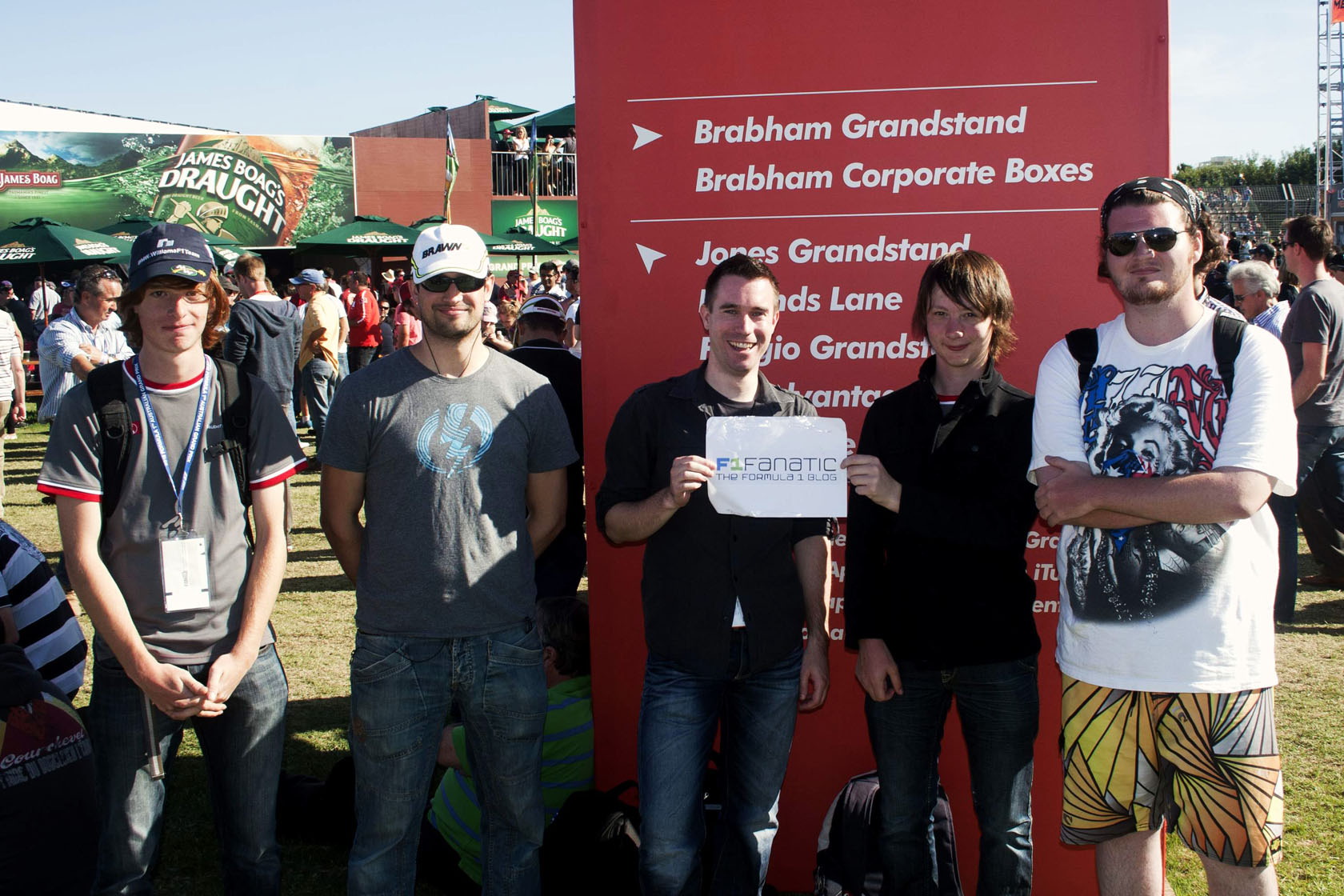 Five F1 Fanatic readers took the opportunity to meet up at the first race of the year in Melbourne.

I flew into Melbourne and was greeted at the airport by fellow F1 Fanatic member Iamsa8, whose family kindly provided me with accommodation over the race weekend.

We braved the inclement weather and arrived at the track early on Thursday to attend the FOTA Fans Forum hosted by Australian commentator Neil Crompton.

Sadly, the sense of it being a ‘fans’ forum was lost and none of the questions that were put to the representatives from Williams, Marussia, Mercedes and Caterham came from members of the audience.

After the forum finished we bumped into the BBC’s Jake Humphrey outside the paddock and had a quick photo taken with him. But the fun was only just beginning.

Steve had won a tour of the paddock and Mercedes garage in a competition on the Australian Grand Prix Corporation?óÔéĽÔäós Twitter account. He saw several drivers along the way and had his photo taken with the Mercedes car.

As Thursday at Melbourne offers little in the way of racing ?óÔéĽÔÇŘ with only support categories cutting practice laps ?óÔéĽÔÇŘ we decided to do some exploring around the park.

Our first stop was the official autograph stand, where we waited in a large queue to meet the two Sauber drivers. We were halfway to the front before I realised I had nothing for them to sign, so I made a frantic dash for the merchandise stand to buy the official race program. Unfortunately, by the time I had returned, it was all over.

We wandered over to the paddock entrance in an attempt to spot some drivers as they were leaving the circuit. We had timed it perfectly, and I managed to get a dozen autographs from drivers and prominent team personnel in the space of just an hour, including Lewis Hamilton, Felipe Massa and Romain Grosjean. Day two greeted us with similar weather conditions. But sporadic showers (and one heavy downpour before the first practice session) failed to dampen the atmosphere, and seeing the 2012 F1 cars for the first time was a highlight of the weekend.

For the second practice session, we left our seats and walked the circuit to find some good general admission vantage points and shoot some good footage of the cars at speed.

Perhaps the best place to watch from was between turns three and six, with spectator mounds and concrete stands offering fantastic views of the cars as they wrestled their way through the first sector.

We also spotted Sebastien Buemi as he walked the track with a member of the Red Bull team. Once again, we quickly snapped a photo with him as he went by.

The weather improved considerably for the third day of our Grand Prix weekend, and both fine practice and qualifying were held in glorious sunshine.

Massa, similarly to in 2011, provided us with plenty of entertainment as he slid the car through turn two sideways on several occasions. The Ferraris looked to be struggling more than anyone else for grip, and were making by far the most corrections through the opening chicane. Steve had arranged a meet-up for F1 Fanatics before qualifying to chew the fat and talk with some very like-minded individuals.

The turnout was lower than last year, but we still got to put some faces to names. The Mercedes ?óÔéĽ?ŁF-DRS?óÔéĽÔäó was a particularly popular topic, with everyone scrambling to get shots of the front wing.

The most exciting part of the day was qualifying. Fernando Alonso arrived backwards right in front of us in Q2 and it was looking likely he was heading for a large shunt. Luckily, the gravel trap did its job and stopped the car before it reached the wall.

The crowd let out a large cheer as an unhappy Alonso emerged from his car having failed to persuade the marshals to give him a push.

It was very satisfying to see McLaren beat Red Bull so comprehensively in qualifying, and it assured everyone that we?óÔéĽÔäóre in for a much more unpredictable season than 2011. Romain Grosjean was the star of the day, however, and his third place was very popular with the crowd.

We headed for the city at the end of the day and hit Southbank, where we immersed ourselves in the St. Patrick?óÔéĽÔäós day atmosphere and viewed the beautiful night scene from above in Melbourne?óÔéĽÔäós tallest building.

Race day was to be a fitting end to an amazing weekend in and around Melbourne. The weather stayed dry and hot for the duration of the race and left us all slightly sunburnt.

On the way to the circuit, we spotted Jaime Alguersuari walking through the streets of St. Kilda in running shorts and a t-shirt. No-one else seemed to recognise the former Toro Rosso driver.

With little on-track action on offer other than the F1 race, we spent much of the day checking out the attractions and entertainment around the track. The entrance to the paddock was a lot more crowded than earlier in the weekend, however, and we gave up on trying to squeeze back in to get some more autographs.

We sought shelter from the sun before the race before heading to our seats half an hour before the lights went out. The race got underway in dramatic style, and we were provided with a spectacular display of chaos as Bruno Senna was tipped into an aerial spin by Daniel Ricciardo right in front of us.

The biggest disappointment for the enthusiastic crowd came when the hero of qualifying, Grosjean, retired in a collision with Pastor Maldonado early in the race.

Mark Webber’s usual poor start was to be expected, and came as no surprise to his hundreds of thousands of supporters.

The appearance of the safety car raised the prospect of the top four being closed up for a 20-lap sprint to the finish.

As we counted down the laps to the finish, we cheered Hamilton and Webber on in their pursuit of Vettel. However, after a while, it became apparent that the Vettel had the legs of his pursuers, as he pulled away from them and began to eat into Button?óÔéĽÔäós lead.

Further down the road, the other local favourite, Ricciardo, had quietly made his way back onto the tail of Jean-Eric Vergne. He closed in on his team mate rapidly before eventually pipping him on the final lap, to the delight of the crowd.

Unfortunately, the laps ran out before Vettel could challenge Button or Webber could find a way past Hamilton. As the flag fell, we hurriedly made our way for the nearest gap in the fence, before running down the pit straight to enjoy the podium celebrations.

The atmosphere was electric, and as the ever-popular Button celebrated his win, the huge crowd cheered loudly and proudly. It was a surreal experience and something we will never forget.

We couldn?óÔéĽÔäót have asked for much more from the first race weekend of the year.

Steve met the Sauber drivers, won a paddock and garage tour, we both got several drivers?óÔéĽÔäó signatures, met a few famous F1 people, walked the circuit, got wet, got burnt, and at the end of it all, saw a classic race. For me, it was easily the best weekend of my life.

See here for some more pictures taken by Dan:

Browse all From The Stands articles

24 comments on “F1 Fanatics meet up in Melbourne”