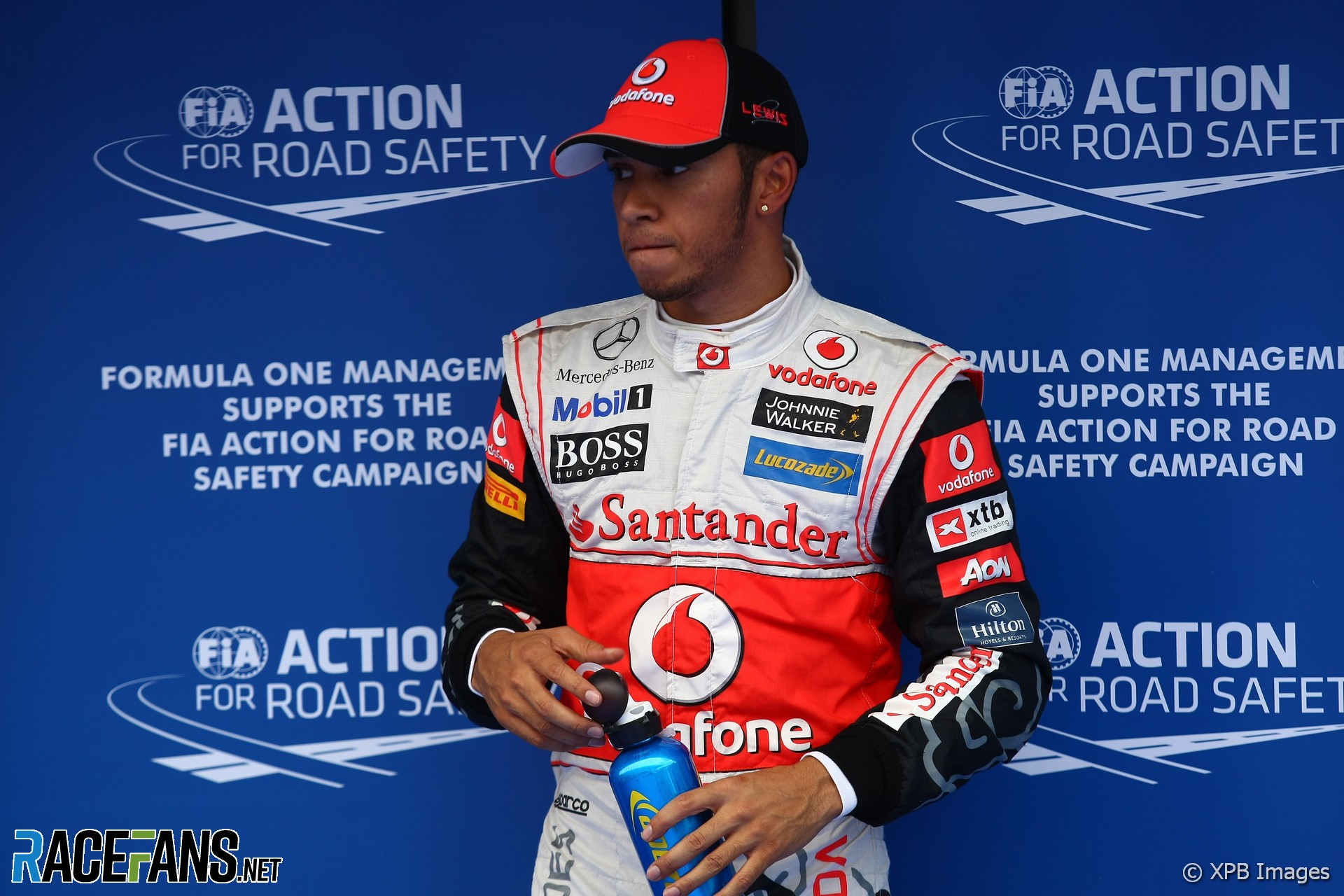 The McLaren driver was fastest in all three parts of qualifying on his way to pole.

He shares the front row of the grid with Vettel and their team mates line up behind them.

Hamilton was the quickest driver in the first part of qualifying, setting a time of 1’37.525 on soft tyres.

Unusually the Red Bull drivers used a set of super soft tyres for their first runs, but appeared not to push them too hard as they secured their places in Q2. Christian Horner later said they had driven to a target lap time.

Both Williams drivers stayed in the pits until the final five minutes. When they came out, Rubens Barrichello was initially faster than Pastor Maldonado, the latter falling at risk of elimination.

They had enough time for a final run each. But Barrichello abandoned his attempt at improvement, feeling the tyres had gone off, and Maldonado’s 1’39.436 was enough to knock his team mate out.

Heikki Kovalainen was the quicker of the two Lotus drivers, who line up in front of the two Virgins.

Daniel Ricciardo did not set a time due to a technical problem and will need permission from the stewards to start the race.

Hamilton stayed on top in the second part of qualifying, lapping almost exactly one second on super softs than he had on softs in the first session.

Vettel could only get within seven-tenths of Hamilton’s time, which put him second.

Michael Schumacher only did a single lap and although he had the track to himself his 1’38.354 was ultimately not good enough to get him into Q3. He complained of a vibration on his car before starting the lap.

It put him ninth but later improvements from Adrian Sutil, Jaime Alguersauri and Paul di Resta left him out of the top ten.

Both Force India drivers secured places in Q3 but Alguersuari was eliminated along with his team mate. So were the two Sauber drivers.

They were joined by Maldonado and Bruno Senna.

Eight cars went out as Q3 began, both Force India drivers holding back in the pits.

Hamilton picked up where he left off in Q2, heading the times with a 1’36.130, his McLaren looking stable and changing direction beautifully in the fast sweeps of turns seven, eight and nine.

But Vettel was threatening – the Red Bull driver crossed the line just three-hundredths of a second off Hamilton’s mark.

Webber led the cars out for their final efforts, the front runners taking care not to end up missing their last chances as they did in Suzuka. Hamilton delivered a clean lap to lower the fastest time to a 1’35.820.

Vettel had to pass Di Resta during his lap but did not appear to be delayed by the Force India. He improved his time but, fell short of beating Hamiton by two tenths of a second.

Webber had a poor final run and Button took advantage to claim third on the grid. The Ferraris share the third row, Massa ahead of Alonso.