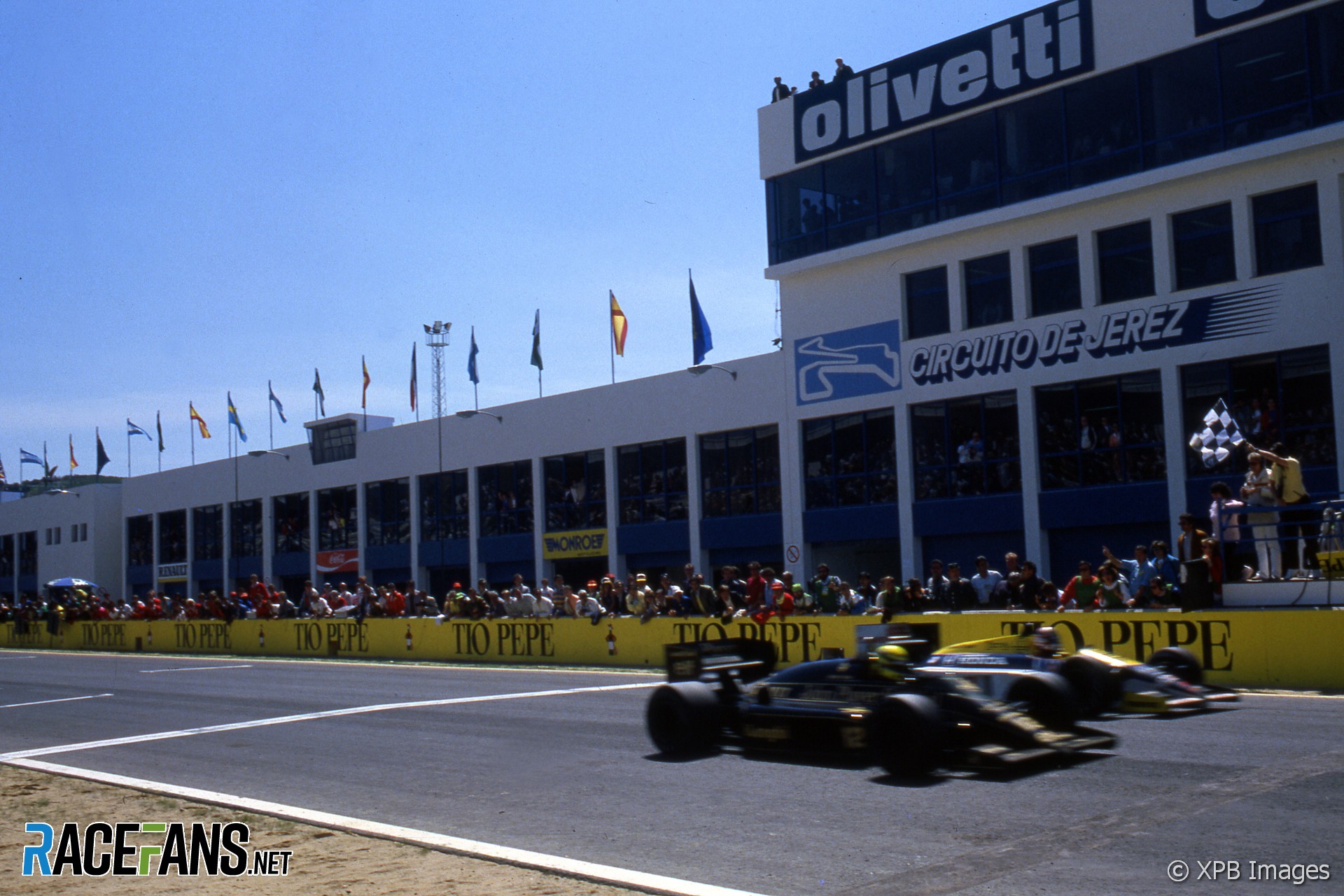 On this day in 1986, Nigel Mansell and Ayrton Senna crossed the finishing line in Jerez just 0.014 seconds apart.

The 1986 Spanish Grand Prix witnessed one of the closest finishes in F1 history.

And the three points he missed out on would have made him champion at the end of the closely-fought 1986 season. Here’s the story of that celebrated race and its epic finish.

One month earlier, Frank Williams had suffered a dreadful accident which cast a shadow over his team.

On March 8th, Williams were at Paul Ricard for the final test session before the season opened in Brazil. The new Williams-Honda FW11 was already proving competitive. Mansell and Nelson Piquet had put the car through its final paces, with Frank Williams keeping an eye on proceedings.

Satisfied with progress, Frank Williams set off on the 90 minute journey towards Cannes and Nice, with the team’s PR co-ordinator Peter Windsow in the passenger seat.

About 15 minutes into the journey in the hills near the village of Meounes-les-Montrieux, Williams lost control of the car. It ploughed nose-first into a field several feet below the road and landed upside-down. The left-front corner of the roof collapsed, trapping Williams underneath.

Williams survived but suffered paralysis and was kept away from his team for months while he made a slow recovery.

In his absence the team pulled together. Mansell said: “We will close ranks. We have already put Plan B into operation, with Frank’s approval. The best thing we can do, and myself and Nelson Piquet, is get the success the team and especially Frank deserves.”

At the season-opener at the Jacarepagua circuit in Brazil the teams had their first taste of racing under new fuel regulations, with the maximum permitted fuel load cut from 220 to 195 litres. This created an efficiency challenge which the Honda-powered Williams excelled at.

Piquet beat Senna’s Lotus-Renault, with 12 litres of fuel still left in the tank and still managed to shave a second off Alain Prost’s two-year-old lap record.

Mansell’s race was much shorter and less successful – he collided with Senna on the first lap and was out.

In his autobiography he said: “On the first lap of the race in Rio I got a good start and thought I had done enough going down the straight to pass him down the inside into the fast left hander. I got alongside, my right front wheel level with his shoulder and began braking, but he suddenly came across and hit me. I braked hard to avoid an accident, but his left rear wheel hit my right front and sent me off the road into the Armco, tearing off my left front wheel.”

“We did not talk about it afterwards, but I learned an important lesson about racing against him that day. If I hadn’t backed off we would both have hit the Armco and it could have been a serious accident. As it was I came off worse and it would not happen again. His tactic was to intimidate and I refused to be intimidated.”

Three weeks later, the teams were in Jerez for the Spanish Grand Prix.

After a four-year hiatus, the Spanish Grand Prix had returned to the world championship calendar with a race at the brand new Jerez de la Frontera circuit near Seville.

It was a brand new circuit, 4.218km in length, 16 corners in all, and regarded as more than adequately wide everywhere. It has been modified since, as the map above shows.

But the spectators’ enclosure was almost empty. There was no Fernando Alonso or any Spanish driver or team to draw in the crowds. Others were put off by the cost of entry – £25 to get in then and at least another £50 for a grandstand seat.

Senna was typically dominant in qualifying, with only the two Williams drivers able to get within a second of him.

On Sunday morning, Senna got away from the line and it was the scene was largely uneventful at the first corner. At the end of the opening lap it was Senna, followed by the two Williams cars, then Rosberg, Prost and Arnoux.

Mansell said in his autobiography: “I was getting rather worrying information from my fuel consumption readout so I decided to drop back a bit and see how things worked out. It worked; by lap 19 the readout said that I was on target again and I put in some hard laps to try to make up some of the ground I had lost.”

He passed Piquet from second place on lap 34 and forced Senna to get boxed in behind a benchmarker for long enough to pass him. He opened up a lead of around four seconds and held it until his tyres began to disintegrate with ten laps to go.

Today the 1986 Spanish Grand Prix is remembered as a classic. But some commentators at the time saw it very differently (how little has changed), not least of which Motor Sport’s venerated Denis Jenkinson.

His race report said: “As always, testing and qualifying was the most interesting time, the race itself being a different matter altogether and the 72 laps round the new Jerez circuit was no exception.

“With fuel limited to 195 litres and tyre wear being critical it was a race of tactics rather than gutsy racing. For the first half the leading bunch, of Senna, Piquet, Rosberg, Mansell and Prost, circulated in [single] file letting Senna set the pace, which he did on his fuel consumption gauge rather than his rev-counter.”

But what most people remember is the nail-biting finish.

By lap 62 Prost had closed in to make the leaders a trio. Senna saw a gap and dived through on lap 63 and Mansell retreated into the pits. His rear diffuser panel was coming loose and one of the rear tyres had picked up a slow puncture.

He came straight back out to record a lap time in the 1’29s from a standing start – just 1.3s slower than his fastest flying lap.

Mansell said: “[Senna] was on the limit and so was I. Under braking from the final hairpin I was too far behind to try to pass, but coming out of it I was right on his gearbox. He weaved, but I wasn’t going to be deterred and I kept my foot in.

“We raced for the finish like 100m sprinters ducking for the tape and although I passed him halfway down the straight, he had crossed the line first by 0.014 seconds, or 93 centimetres. If the finish line had been five yards further down the road I would have won. And those [three] extra points would have made a big difference at the end of the year.”

The McLarens of Prost and Keke Rosberg finished third and fourth, believing they had severe fuel consumption problems when in fact they were seeing faulty cockpit readouts. The reliable Benetton B186s of Teo Fabi and Gerhard Berger took the last of the six points-paying places. Only two other cars were classified.

In the words of Nigel Mansell: “Afterwards Prost came up to me and apologised. He said: ‘I thought that Ayrton was too far ahead for either of us to catch him. If I had known you could do it I would have let you past!'”

Were you at this race? Do you remember it? Tell us about it in the comments.