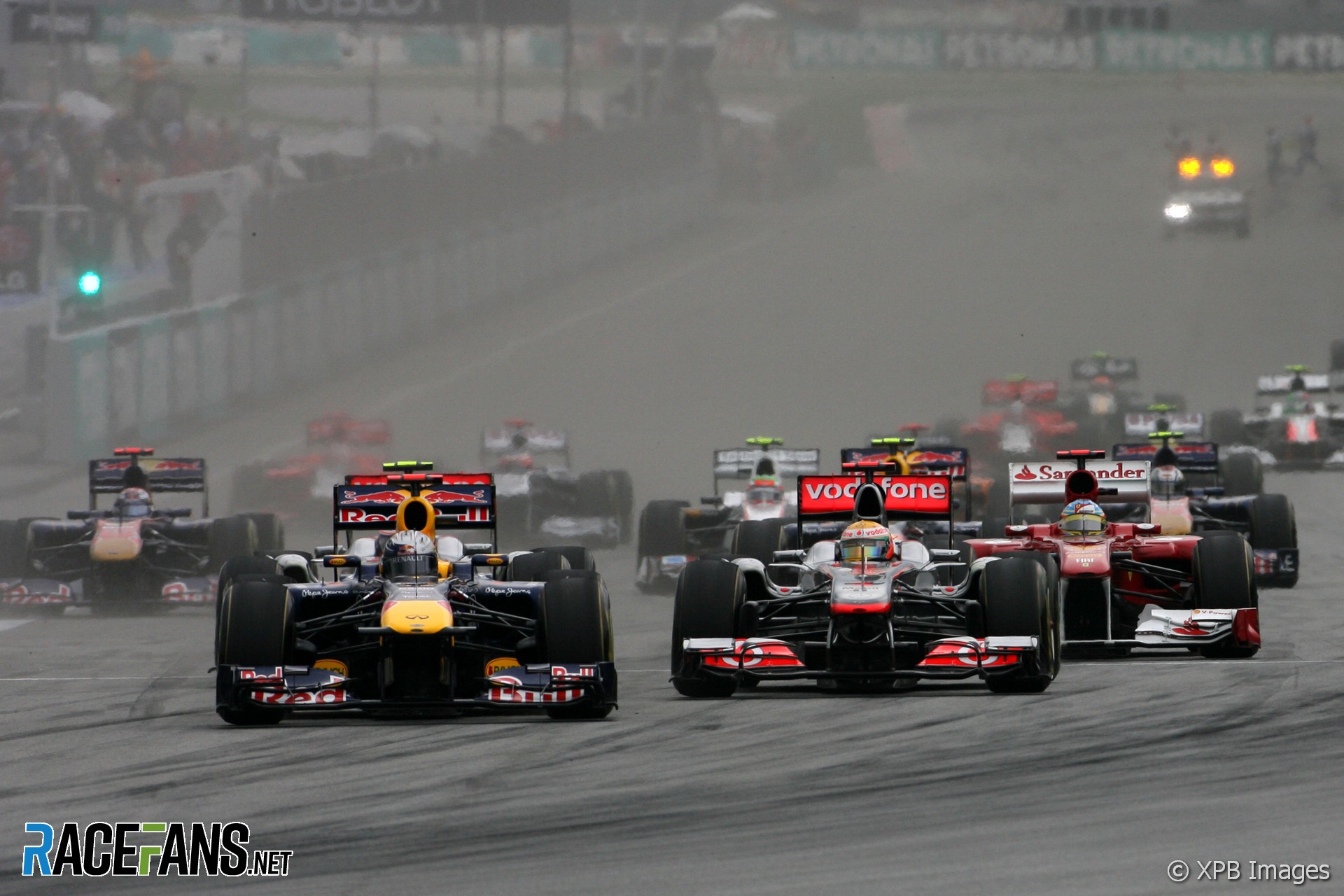 Sebastian Vettel kept up his winning streak with his fourth victory in a row in Malaysia.

But Red Bull’s rivals were able to push them closer during the race and Jenson Button finished only three seconds behind.

Vettel held his lead at the start but had to defend carefully from Lewis Hamilton. That allowed Nick Heidfeld – who made an excellent start from sixth – to grab second ahead of the two McLarens.

The other Renault of Vitaly Petrov also made a good start but he couldn’t resist pressure from Felipe Massa. The Ferrari driver used DRS to pass at turn one, and Petrov went off shortly afterwards gifting sixth to Fernando Alonso.

Mark Webber’s Kinetic Energy Recovery System failed to work at the start and he dropped like a stone, ending up in a dogfight with Kamui Kobayashi for tenth place.

After several passes and re-passes Webber instead tried to gain a strategic advantage with an early pit stop on lap ten.

The runners in front of him quickly reacted over the following laps, and Renault were unable to maintain Heidfeld’s advantage over the McLarens.

Massa suffered a slow pit stop and dropped further down the order. But Alonso left his pit stop later and came out on Button’s tail, passing the McLaren at the first corner.

The leading drivers stuck with the soft tyres for the first round of pit stops but Hamilton switched to hards for his third stint. His pace dropped off during the stint and McLaren brought him in for his third stop on lap 37 – with 19 still to go.

His race began to unravel as a slow stop dropped him behind Button. He struggled to make his second set last – team mate Button was much quicker after his last stop – and Alonso quickly caught him for third.

While Hamilton struggled for pace Alonso’s adjustable rear wing had failed meaning he did not have the advantage of DRS Nonetheless he mounted an attack on the McLaren and was shaping up for a move down the inside of turn four when he clipped Hamilton’s right-rear tyre.

The impact smashed Alonso’s front wing and sent him into the pits for a fourth stop. Hamilton’s car appeared undamaged but he was still struggling with his tyres.

Heidfeld breezed past him using DRS on lap 51. Hamilton had an off afterwards and, despite having only four laps left, pitted a fourth and final time for more hard tyres.

Button tried to give chase of Vettel, but even though the Red Bull driver’s KERS was only working intermittently, he was easily able to maintain a gap over the McLaren.

Webber had also made a fourth stop and with fresher tyres was able to pass Massa for fourth place. The recovering Alonso took seventh.

Hamilton came out of the pits behind Petrov but the Russian driver’s race came to an end in a bizarre incident. He ran wide off the track, bounced high into the air, and landed so hard it broke the mounting on his steering column. He came to a stop while trying in vain to re-attach the wheel.

In eighth place was the only driver to make two stops – Kamui Kobayashi in the Sauber. His team mate Sergio Perez retires after hitting debris which fell off another car.

Michael Schumacher and Paul di Resta rounded off the points-scorers, the latter beating his team mate home by ten seconds.

There was little sign of the widely-anticipated rain, aside from a brief shower around the first pit stops. The race was action-packed without it, but in the end the world champion prevailed once again.