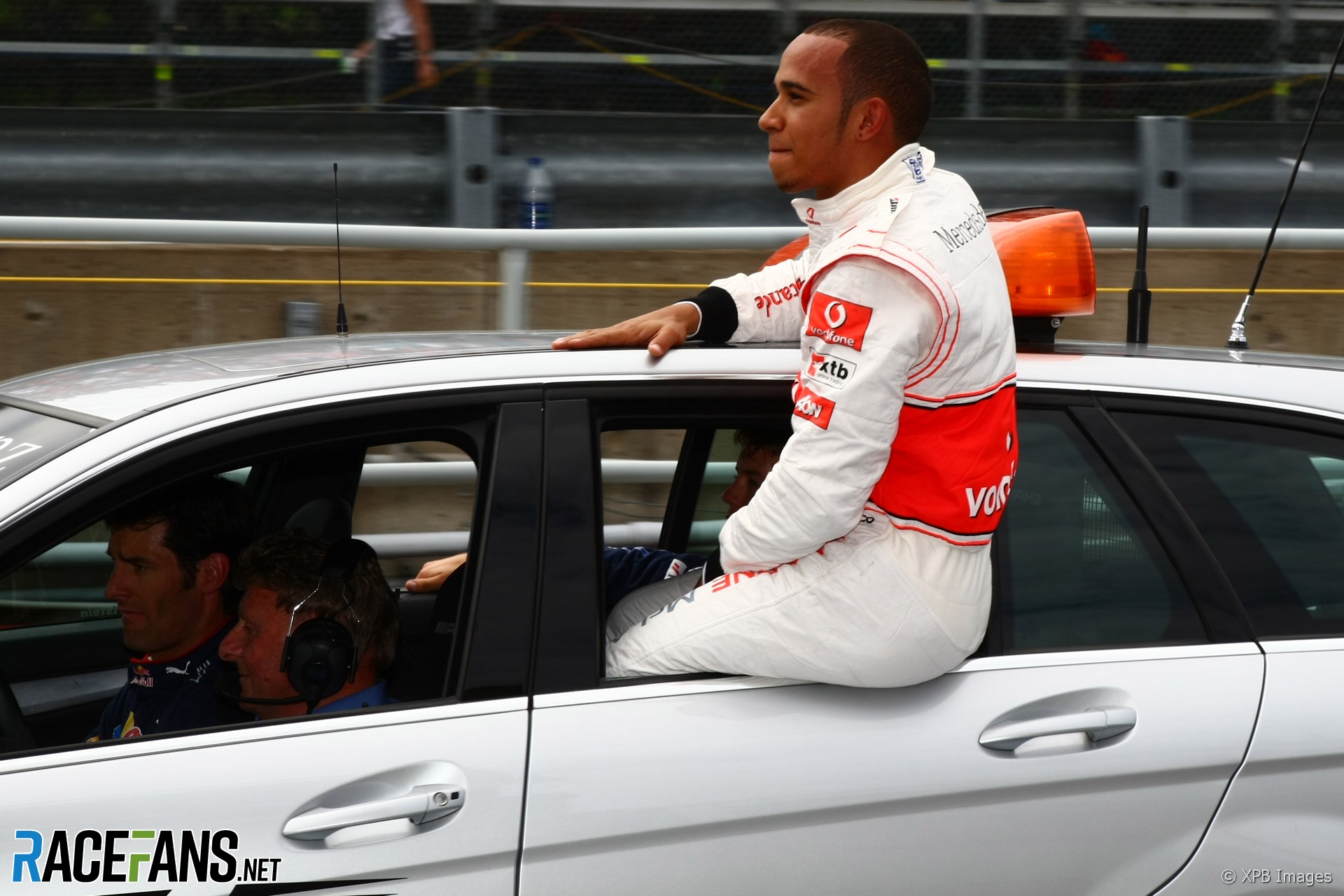 Lewis Hamilton claimed his third pole position on his third visit to the Circuit Gilles Villeneuve.

But he cut it very fine on fuel and had to switch his engine off as he returned back to the pits as McLaren feared they wouldn’t have enough to give a sample to the FIA.

The two Red Bulls, who had dominated qualifying previously this year, line up behind Hamilton on the grid for tomorrow’s race.

Qualifying began on a dry track in slightly warmer temperatures than at the end of final practice.

The teams wasted no time getting started, with Timo Glock queueing up at the end of the pit lane ready for the start, and quickly being joined on the track by the Lotuses, Vitaly Petrov and Karun Chandhok.

Most of the front-running teams used the medium compound tyres including the McLarens and Ferraris. But Red Bull began the session on the super-soft tyres, and Sebastian Vettel’s best time put him second, just 0.3s slower than Lewis Hamilton’s.

Kamui Kobayashi faced the threat of elimination at the end of the session and his last lap wasn’t good enough to reach Q2. He only narrowly beat Heikki Kovalainen’s Lotus.

Hamilton was the fastest driver again in Q2, but Jenson Button did not look as comfortable in the McLaren. The pair did lap times at the same time and Hamilton was a second quicker than his team mate.

The McLarens started the session on the medium tyres while most other teams ran the super softs. Button improved his time on the super softs but Hamilton didn’t need to improve his time and came back to the pits.

Vettel in the Red Bull was second, just three hundredths of a second slower than Hamilton, having used the super softs. Fernando Alonso was third, as he had been in Q1.

Button’s late improvement pushed Michael Schumacher deeper into the drop zone. He needed an improvement on his final run but braked too late at the final chicane and had to abort his run.

That left him 13th behind the two Williams cars while his team mate made it into Q3.

Only the McLaren drivers did two sets of laps in final qualifying. Hamilton’s first effort was again a second quicker than Button’s.

As they came back onto the track their rivals had joined them. And three of them, unusually, were using the medium compound tyre instead of the super-softs: both Red Bulls and Robert Kubica.

Red Bull found plenty of speed on the medium tyres, Mark Webber beating Hamilton to set the fastest time with a 1’15.373.

Sebastian Vettel look set to beat Webber’s time but repeated Schumacher’s mistake of cutting the chicane at the end of the lap and had to abort his lap.

McLaren cut Hamilton’s final lap very fine in more than one way. He had just six seconds to spare as he begun his lap, but set a 1’15.105 to beat Webber by more than two-tenths of a second.

But on his cruise back to the pits his team instructed him to stop the car as they were concerned he was short on fuel. Hamilton switched the engine off and stood up in the cockpit as the car rolled along, eventually getting out to try to push the car home.

McLaren will have to give a fuel sample after the session and if it turns out there is too little fuel in the car Hamilton could receive a penalty.

Assuming he doesn’t, this wasn’t just the first time Red Bull had been beaten in qualifying this year. It was also Hamilton’s third pole position in as many attempts at the Circuit Gilles Villeneuve.