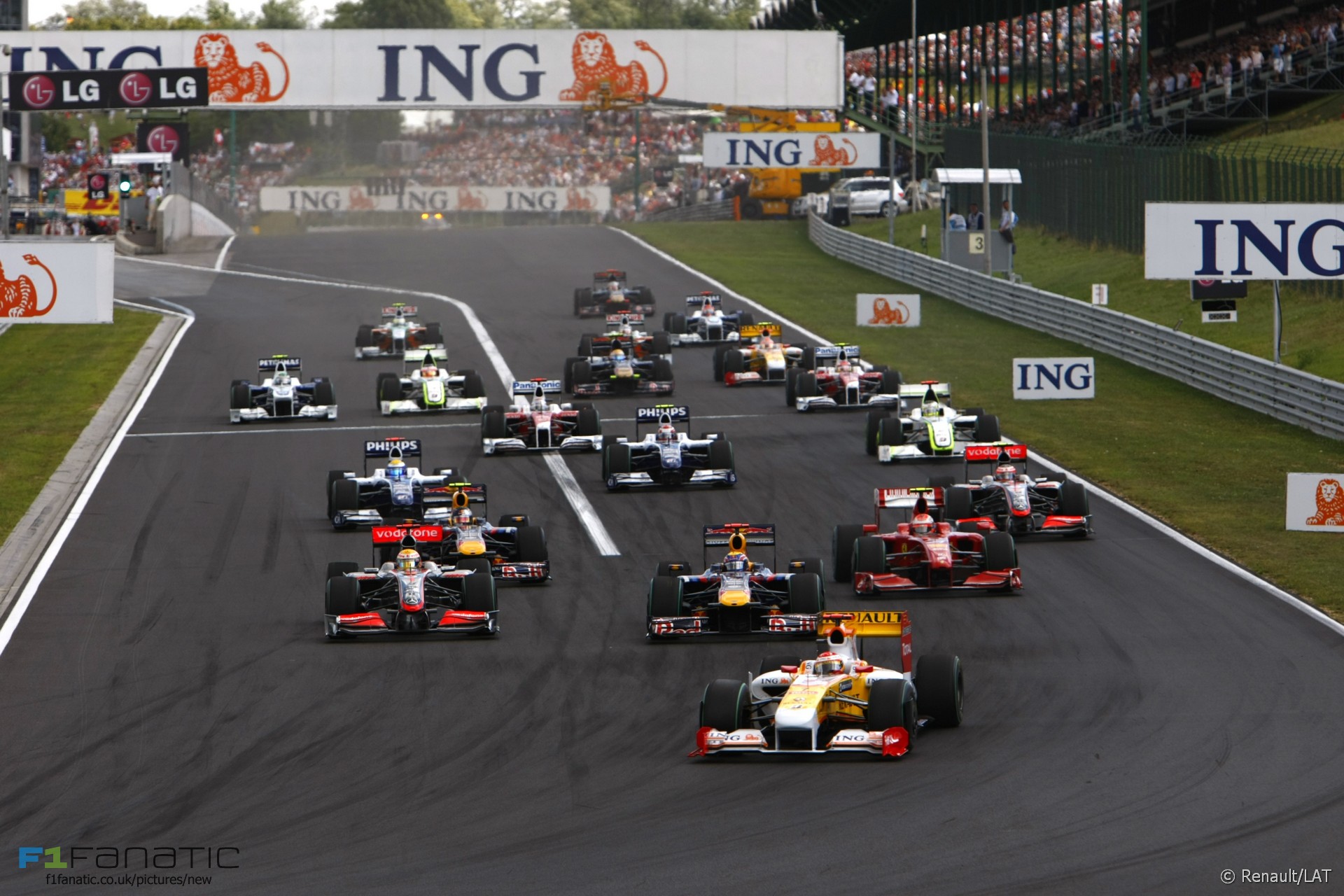 Lewis Hamilton seized the lead of the Hungarian Grand Prix and never let it go as McLaren bounced back from their terrible start to 2009.

The world champion was followed home by Kimi Raikkonen – the only Ferrari in the race following Felipe Massa’s crash – meaning KERS-powered cars filled the first two places on the podium for the first time.

Mark Webber boosted his championship chances with third – but Sebastian Vettel failed to finish and Jenson Button could only manage seventh.

Fernando Alonso kept his lead easily at the start – but behind him four cars came out of the first corner side-by-side. They were led by Webber, who re-passed Hamilton’s McLaren, which had made its usual terrific KERS-boosted getaway.

Raikkonen had also made rapid KERS-powered progress and took up fourth behind Hamilton, squeezing Vettel aside as they headed towards turn two. That damaged the Red Bull, and he slipped down the order behind Nico Rosberg and Heikki Kovalainen. Shortly afterwards the stewards announced they would take a look at it after the race. and Vettel laid blame for the contact unequivocally at Raikkonen’s feet.

Button was beaten away from the line by Kazuki Nakajima and fell to ninth. But – just as he did at Bahrain and Sepang – a crucial pass on the second lap put him back in front of the Williams driver.

Alonso’s light Renault quickly scampered off into the lead, but Webber couldn’t keep Hamilton back. On lap four another well-timed jab of the KERS button got Hamilton alongside the Red Bull and past around the outside of turn two.

Despite carrying more fuel, Hamilton began cutting into Alonso’s lead. Alonso’s 2.9s advantage lap five was trimmed back to 1.2s by lap nine. From there Hamilton wasn’t able to get much closer – but Alonso was about to come into the pits for a stop which proved the undoing of his race.

The front-right wheel didn’t attach to the R29 properly, and by the second corner the wheel fairing had blown free. Even more alarmingly, in light of recent accidents, the wheel then fell off completely, but mercifully no-one hit it. His race ruined, Alonso limped back into the pits for a new wheel, and later retired.

Hamilton now took up the lead and quickly extended his advantage over Webber. Despite having gone to the grid with more fuel, Webber came into the pits before Hamilton, on the same lap as Raikkonen.

Webber, too, ran into trouble on his pit stop and the team ended up releasing him as Raikkonen was passing by. The pair avoided contact – and there was no word of an investigation by the stewards – but Raikkonen took the position.

Vettel had more serious problems. After his pit stop on lap 21 he complained to the team that his car felt un-driveable, and there were signs of smoke from the back of the car. The team summoned him to the pits to have the car looked at, but after a brief return to the track with a new front wing tyres, he retired the Red Bull, blaming his problem on the contact with Raikkonen.

After the early round of pit stops Hamilton held onto his lead with Button now up to second – though yet to come into the pits. He was catching Hamilton quickly, but not happy with his car’s performance on the super soft tyres. But a switch to soft tyres on lap 25 only made things worse and he slipped out of the points positions – Giancarlo Fisichella overtaking the Brawn as it came out of the pits.

Hamilton’s hold on the lead never looked anything less than solid, and so did Raikkonen’s grasp on second, despite a slow getaway after his second stop. Webber dropped back from the Ferrari and was caught by Kovalainen and Rosberg. The McLaren driver pitted first of the three, falling behind Rosberg, but Webber held his position.

Timo Glock ran two very long stints which worked well for him, and would have done better had he not got stuck behind Raikkonen. After his final pit stop he came out ahead of not only team mate Jarno Trulli but also Button, and spent the run to the chequered flag vainly chasing Kovalainen. Trulli in turn had Nakajima and Rubens Barrichello close behind him – the second Brawn driver enduring a compromised race after starting outside the top ten.

At the back of the field, newcomer Jaime Alguersuari finished ahead of just one other runner but it was an important one: his team mate Sebastien Buemi

. The Swiss driver spun off at turn two late in the race, and both Toro Rossos set their fastest lap on the final tour.

The result lifts Webber to second in the drivers’ championship race, making him the leading rival to Button. The Brawn driver’s lead is trimmed to 18.5 points and Brawn’s lead in the constructors’ championship is now only 15.5.

Driver of the race

Hard to pick anyone other than Lewis Hamilton for driver of the race. Here’s who you picked on Twitter:

lukeatherton – hammy baby!!
dcowlives – Has 2 b Hamilton, expected him 2 take lead but not stay there & in such commandng fashion. 10/10 to the boy from Stevenage.
rubvic – I think Lewis did the best job, and managed to open a confortable gap.
HansiF – Congratulations to Jaime Alguersuari who finished ahead of his team mate in his first ever Grand Prix
shaohanmandy – I should say ….Lewis
noelinho – Hamilton has to be driver of the race, but a great drive from Rosberg too. He’s definitely worth an honorary mention.
TweetingSteve – Hamilton no doubt – great start, great overtaking of Weber and great race from the front.
Jake360 – Kimi drove the best in my opinion with a car not as good as the Mclaren. Can’t take anything away from Lewis though.
Pearlaceous – Got to be Ham for me :)
Greg0800 – Glock

Who was your driver of the race? Have your say below.

Update: Raikkonen has not been punished for his actions at the start. Red Bull have been reprimanded for releasing Webber unsafely into the path of Raikkonen.

104 comments on “Hamilton takes McLaren back to winning ways”