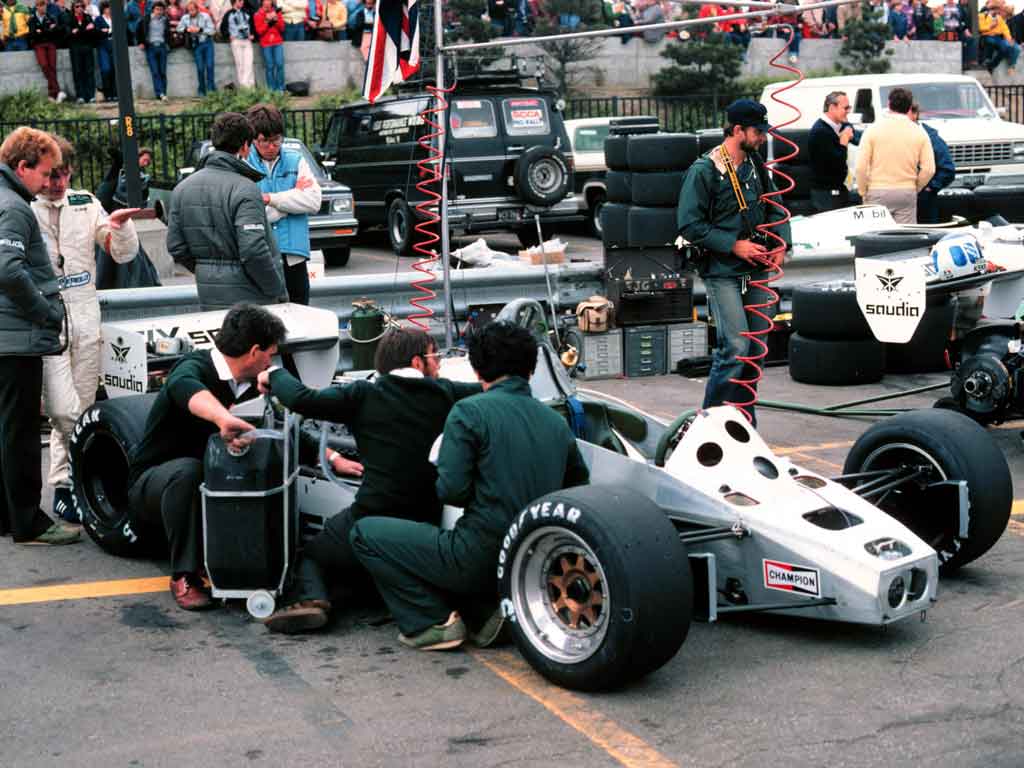 Scott Speed would have loved it: Twenty-five years ago the F1 circus visited the United States three times in one season. The first ever Detroit Grand Prix was the second round in the USA that year.

But having made the trek from Monaco in less than a week the teams arrived to find the street circuit wasn’t even ready. Practice was cancelled while run-off areas and tyre walls were finished, and the drivers amused themselves by playing football (or ‘sawker’) on the pit straight.

It was the first act in a comedy of errors. But the 1982 Detroit Grand Prix would eventually see one of the truly great drives – a stunningly improbably victory for McLaren’s John Watson.

The next embarrassment of the weekend came as reigning champion Nelson Piquet failed to qualify. The last such champion to suffer such ignominy had been Jody Scheckter of Ferrari at Canada two years previously.

Piquet’s race car had succumbed to electric failure in qualifying so he switched to the spare car. That had a standard Cosworth DFV engine instead of the new BMW turbo, but that was not necessarily a disadvantage around Detroit’s sinuous streets.

But rain in the second qualifying session prevented him from setting a time, and the champion was out of the race before it had begun.

That left Alain Prost’s Renault on pole position alongside Andre de Cesaris’s Alfa-Romeo. Keke Rosberg’s Williams-Cosworth was third ahead of Didier Pironi, still the only Ferrari driver following the death of Gilles Villeneuve in May.

Watson’s McLaren was 17th – but he knew his Michelin tyres were far more effective in the race than in qualifying.

The comedy of errors continued on race day. Everything got underway as planned but after so little practice it was hardly surprising that many drivers crashed. Mauro Baldi hit Raul Boeselm putting both out. Manfred Winklehock, sensationally quickest in the morning warm-up in his ATS, found the wall on the second lap.

Jean-Pierre Jarier and Andrea de Cesaris both retired on the second lap with car problems.

But it all kicked off as lap seven began. Roberto Guerrero spun at the first corner, and although Elio de Angelis and Watson both dodged the Ensign, Monaco winner Riccardo Patrese hit the barriers trying to avoid it.

One of the rear brake ducts on Patrese’s Brabham started burning, a marshal panicked and suddenly the red flag was out – race stopped. This minor incident somehow took an hour to rectify.

The stoppage was a blessing for Prost who had held the lead but was struggling with his tyres and being reeled in by Rosberg. The break gave him the chance to put on fresh rubber.

Prost drew away from Rosberg at the start with Pironi third, Bruno Giacomelli’s Alfa fourth and American Eddie Cheever’s Ligier fifth. But the Renault’s famously rotten reliability soon took care of Prost, and Rosberg slithered around the outside of him on lap 23.

Watson had been 13th at the restart and by lap 25 passed Rosberg’s team mate Derek Daly for seventh. He took Prost for sixth on lap 29 and Giacomelli on the next lap to hold fifth.

Three laps later he joined the Pironi-Cheever-Niki Lauda fight for second. Stunningly, on the 33rd lap, he passed first team mate Lauda, then Cheever, then Pironi to leap into second place. It was a breathtaking piece of overtaking.

Rosberg was 12 seconds ahead but the flying Watson decimated the Finn’s advantage on passed him for the lead just four laps later. It was a carbon copy of what had happened at Zolder one month earlier, when Watson had seized the lead from Rosberg with just two laps remaining.

Seeing the rate of his team mate’s progression spurred Lauda into action. He too passed Cheever and Pironi and set off after Rosberg. But the twice-champion misjudged his passing move on the Williams and hit the wall on lap 40, becoming the 13th retirement of the 26 starters.

Watson cruised home to take an exceptional victory – the fourth of his career. The battle for the 1982 title would ultimately be fought between him and Rosberg. But although Rosberg took only one win to Watson’s two, the Finn would be champion.

Behind Watson were home hero Cheever, Pironi, Rosberg, Daly and Laffite. The Detroit Grand Prix may have had an inauspicious beginning, but it provided an exceptional race.

The locals were somewhat bemused by it, though. The following day the Motor City’s press had a lot to say about the race’s average speed being only 78mph – slower even than the cars circulated at Monaco.