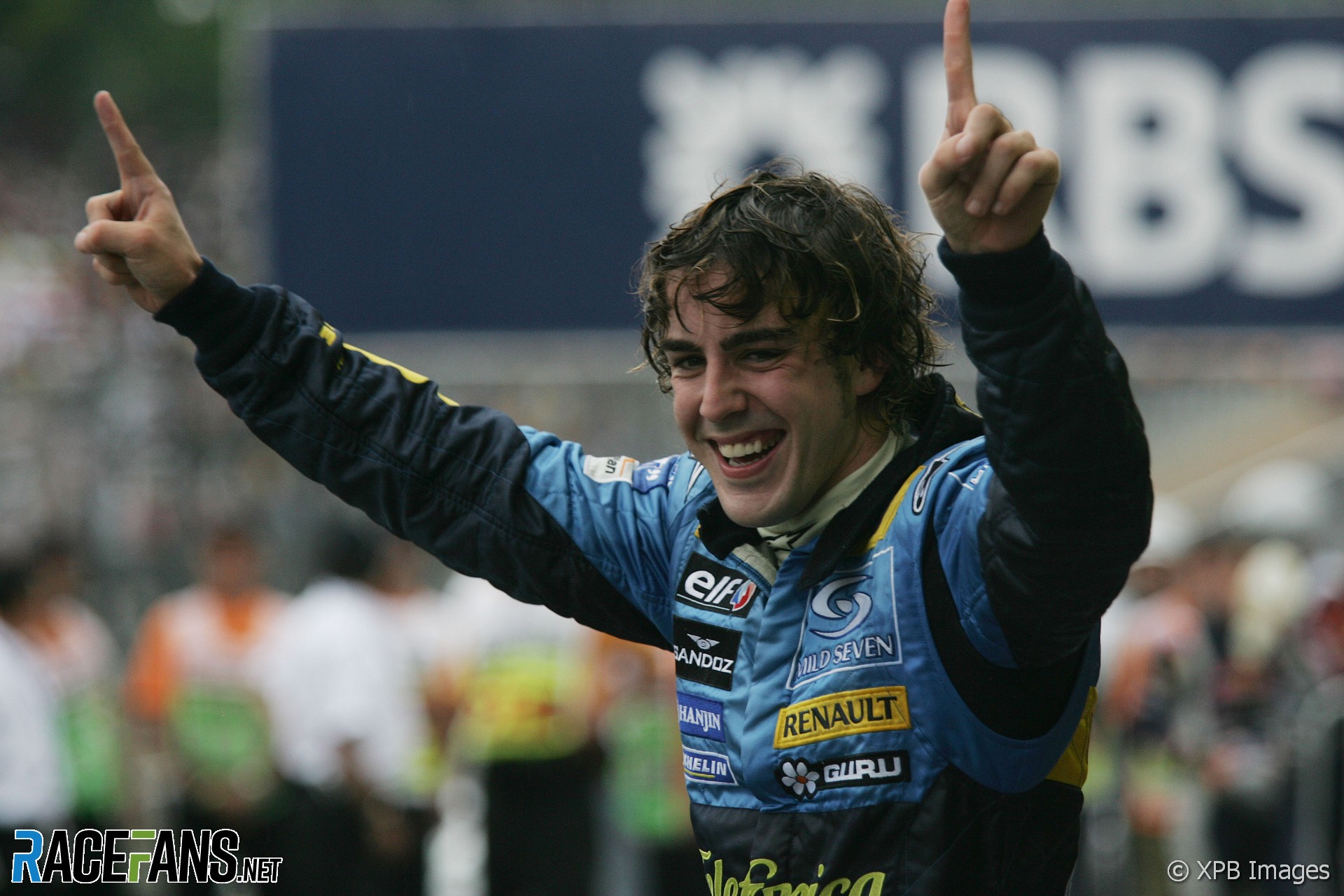 Fernando Alonso became the F1’s youngest ever drivers’ champion by scoring his 13th podium in 17 races at the Brazilian Grand Prix in Interlagos.

In the end, the drivers’ championship worked out just as everyone expected it to: Raikkonen just had too few races left to haul in Alonso. The Renault driver’s title-winning drive may not have the most exciting, but his championship campaign has had plenty of highlights from fending off Michael Schumacher at Imola to his last-lap victory over Raikkonen at the Nurburgring.

Ever the model of cool, Alonso used his updated R25 to take pole for the race ahead of Montoya, who had been handicapped by running early in the session thanks to Antonio Pizzonia taking him out at the end of the Belgian Grand Prix.

As in Belgium, several teams had prepared their cars in anticipation of race-day rain, but this time it didn’t come. Jenson Button was among those who never reaped the benefits of running extra wing, sacrificing straight-line speed.

Raikkonen fluffed his entry to turn one in qualifying and lined up fifth ahead of an inspired Christian Klien who put in his qualifying performance of the year – and possibly his entire career.

The start was frantic – Montoya jostled Alonso but couldn’t find a way past. Raikkonen took Giancarlo Fisichella for third at turn three then Schumacher launched his Ferrari at the Renault at turn five and scrambled ahead in a scintillating move.

Meanwhile the Williams cars had sandwiched David Coulthard’s Red Bull and all three crashed out – though Mark Webber limped back to the pits and resumed on lap 29.

This required a brief safety car intervention and on the restart Alonso ran deep at turn one. Montoya pounced, reversed the move and Alonso had no choice but to let him through into turn three. With Raikkonen third, there was no need to fight anyway. Fisichella reversed Schumacher’s pass at the restart as well, so the constructors’ championship leaders now held the top four places.

Although Montoya could only eke out a three-second lead over Alonso, lap 22 gave the lie to the Renault’s performance as Alonso pitted five laps before Montoya and eight before Raikkonen. Klien justified the high praise of his qualifying lap by stopping on lap 24, but Felipe Massa had clearly been showboating as he was only fuelled to lap 17, covering 18 laps fewer than team mate Jacques Villeneuve.

Raikkonen’s stop was enough to give him second, just behind Montoya, but as in 2004 he lacked the pace to really push the Colombian. Surprisingly it was Raikkonen who showed the first signs of neck fatigue around the high-loading Interlagos track, not his team mate who is apparently still recovering from a shoulder injury. Alonso sat back in third, keeping an eye on the gap to Schumacher (who re-passed Fisichella during the pit stops) and let his metronomic Renault reliability carry him to the title.

The fuel stops put the race into stalemate. None of the top three had any particular inclination to catch the other, and Schumacher hadn’t the pace in fourth to get closer. Once again question marks hung over Fisichella, fifth, who should not have ended up behind the Ferrari, which was part of the reason why McLaren finally seized the initiative in the constructors’ championship from Renault. Rubens Barrichello, Button and Ralf Schumacher took the remaining points.

But the drivers’ championship was all over bar the shouting.

On lap 71 Alonso became the youngest ever champion, finally breaking Emerson Fittipaldi’s 33-year-old record, and setting a standard that even Michael Schumacher can never beat.

Alonso is also the sport’s first new champion since Mika Hakkinen in 1998 and the 27th individual to win it.

For Schumacher, his five-year reign as champion is at an end.