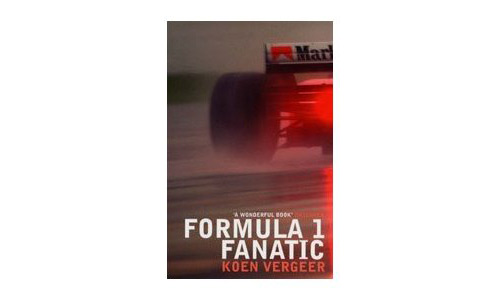 The majority of books on Formula 1 are biographies of driver and histories of famous teams. Koen Vergeer’s Formula One Fanatic is something quite different, and an essential book for fellow F1 fans.

This is not yet another cash-in biography of a half decent driver or cement block-sized ‘encyclopaedia’ of the sport with lots of pretty pictures but no new information. This is an individual perspective of Formula One written by a fan who lives and breathes the sport – in many ways an inspiration for this very website.

Vergeer writes with an honest romanticism about his passion for the sport, from his early boyish fascination with cars, through an adolescence troubled by the shocking fatalities that blighted F1 in the seventies, to his contemporary struggle to comprehend how the purity of Formula One has been diluted by the arrival of major manufacturers, massive sponsorship deals, and constant revisions to the rules to make the sport more TV-friendly. This book is for all of those who’ve held the sport dear for so long, even through those times when we feel we get so little out of it.

The narrative takes us from the early seventies to the end of 2002 – a substantial span of F1 history in under 300 pages. The author assumes that the reader brings some familiarity of the sport with them, and those who don’t get a small glossary at the back to refer to. But unless you’re a big fan, or married to one, this book will probably have only limited appeal. It’s Fever Pitch with a Formula 1 follower substituted for an Arsenal fan.

Such a follower will already be quite familiar with the ‘big stories’ of the three decades of F1 history covered by Formula One Fanatic: the fraught political arguments of the late seventies and early eighties, the growing demands for better safety, the banning of ‘ground effect’ cars and turbos, great driver rivalries, and that black weekend in Imola in 1994.

A major theme is Vergeer’s the regularity of death in Formula One in his early years of following it. On his first visit to a Grand Prix, the Dutch in 1973, Roger Williamson was killed a notorious incident when no marshals were able to help right his burning car, and he bas burned to death in the cockpit.

Vergeer’s account brings the violence of the sport in these earlier years into focus far better than statistics can. We know death was prevalent in early Formula 1 – but writing like this drives home the horror and revulsion among many at what was happening.

As I warmed to the style of this book it does feel in the later chapters as if it lacks direction. As a kind of ‘social history’ of Formula One it is packed with illuminating insight from a relatively un-partisan fan. But aside from the occasional morbidity of the sport it largely steers clear of some of the bigger issues.

It’s a book you shouldn’t miss though – there’s nothing else that comes close to it for capturing the passion of a sport that, though in some respects a pale shadow of its former self, still captivates millions the world over.